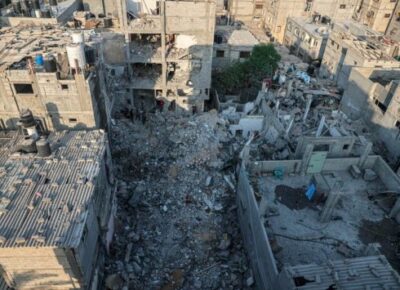 Field Update 4: The Palestinian Center For Human: Israeli Occupation Forces (IOF) continue its offensive on the Gaza Strip for the third day in a row by conducting airstrikes, particularly on houses, as a house was struck without prior warning and destroyed over its residents.

As a result, 7 civilians, including a woman and a mother with her son, were killed. Among those killed were Khaled Saeed Mansour, the commander of Al-Quds Brigades, and two of his companions.

IOF announced that the airstrike targeted Mansour, and this falls under its extrajudicial execution policy. Also, 49 Palestinians were wounded, including 23 children and 14 women, and most of them were injured in the airstrike on the house in Rafah.

The death toll since the beginning of the Israeli offensive has risen to 23, including 10 civilians: 4 women and 2 children, while 265 others have been injured, including 95 children, 36 women, 8 elderlies, and 11 in serious condition.

The following are the most significant developments:

17:55 on Saturday, 06 August 2022: a girl was wounded after an Israeli drone targeted an empty land with a missile in Beit Lahia, northern Gaza Strip.

20:45: a girl was wounded after an Israeli warplane targeted an empty land with a missile near Al-Jazaa’eri Mosque in Jabalia.

21:30: the IOF’s warplanes fired 6 missiles at a 3-storey house, which includes rented apartments, in Rafah refugee camp, without prior warning, destroying a house over the heads of its residents and 7 neighboring houses.

The Civil Defense and Municipality crews continued to recover the bodies of the dead and the wounded from the rubble until 05:00 on Sunday, 07 August 2022. IOF declared the airstrike had targeted Khaled Saeed Mansour (47), the commander of Al-Quds Brigades in the southern Gaza Strip.  Mansour was pulled out of the rubble with his two companions: Ziad Ahmad Khalil Al-Mudallal (35), and Raafat Saleh Ibrahim Al-Zamili (Sheikh Eid)( (41.

The rest of the victims were only civilians living in the same building or in the neighboring houses and were identified as: Mohammad Iyad Mohammad Hassouna (14), Ismail Abdul-Hameed Mohammad Salama/Dweik (30), and his mother, Hana’a Ismail Ali Dweik (50), and Alaa’ Saleh Tahrawi (30).

04:45 on Sunday, 07 August 2022: IOF’s warplanes launched a missile near a house in Al-Nasr village, northern Rafah, injuring 9 residents of the house and their neighbors, including 3 children and 2 women.

05:15: IOF’s warplanes fired two missiles at a 200-sqm house belonging to Muhammad Musa Muhammad ‘Arada in Al-Tanour neighborhood in Rafah and destroyed it completely, rendering a family of 5 homeless.  However, no casualties were reported.

07:10: 2 Palestinians were wounded by shrapnel of a missile fired by IOF’s warplanes on an agricultural land in Qarara village, east of Khan Yunis.

17:00: IOF fired an artillery shell at a landfill belonging to the Jabalia Municipality. As a result, a worker was wounded, and a garbage truck was badly damaged

PCHR’s fieldworkers and lawyers continue to document, investigate, and monitor all incidents and violations resulting from the ongoing IOF attacks.

PCHR fears that there will be more civilian casualties in an area considered among one of most densely populated areas in the world and where there is not any form of protection, including public and private shelters or even safe corridors.

PCHR brings to mind that in recent offensives on the Strip, civilians and civilian objects were always under IOF’s attacks as a way of exerting pressure on the Palestinian armed groups.

PCHR emphasizes that these airstrikes violate the principles of necessity and proportionality while conducting directed attacks against densely populated areas and use of weapons based on collective punishment is a grave breach of the four Geneva Conventions of 1949 and amount to war crimes.

PCHR calls upon the international community to take immediate action in order to stop the Israeli crimes and avoid any further deterioration of the humanitarian situation.