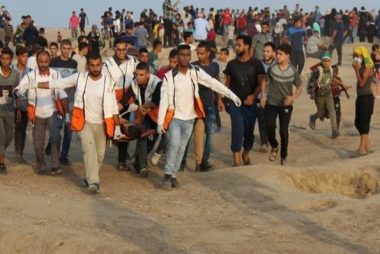 On Friday, 31 August 2018,  using excessive lethal force against the peaceful protesters in eastern Gaza Strip, Israeli forces wounded 75 civilians, including 16 children, a journalist and 2 paramedics; one of them was a female paramedic who sustained serious wounds, after hitting them with live bullets and direct tear gas canisters. Two of those wounded sustained serious wounds.

Moreover, dozens of civilians suffered tear gas inhalation, despite the decrease in the number of demonstrators for the 23rd  Friday in a row. During this week, the Israeli forces continued to target medical personnel working in the field.

Moreover, an ambulance sustained damage after directly targeting it in eastern Jabalia, indicating that there is a systematic Israeli policy to target medical personnel and obstruct their humanitarian work, which is protected under the rules of international humanitarian law.

The Israeli forces used upon highest military and political echelons excessive force against the peaceful demonstrators who posed no threat to the life of Israeli soldiers.

The following table shows number of Civilian casualties due to the Israeli suppression of the Return Demonstrations Since 30 of March:

Investigations and observations by PCHR’s fieldworkers emphasize that the demonstrations were as always fully peaceful and  PCHR’s fieldworkers did not witness weapons or armed persons whereas Israeli forces’ snipers continued to position on the hills, behind the sand barriers and in military jeeps along the border fence.

At approximately 16:30, thousands of civilians, including women, children and entire families, started swarming to 5 encampments established by the Supreme National Authority for the Great March of Return and Breaking Siege along the border fence, east of the Gaza Strip’s governorates. They raised flags, and chanted slogans and national songs in addition to flying kites and firing balloons, while hundreds of them, including children and women, approached the border fence, set fire to tires and attempted to throw stones at the Israeli forces. The participants were present around 300 meters away from the main border fence.

The Israeli shooting, which continued until 19:30, resulted in the injury of 75 civilians, including 16 children, a journalist and 2 paramedics after hitting them with live bullets and direct tear gas canisters. The wounded paramedics were identified as:

In addition, dozens of civilians suffered tear gas inhalation and seizures after tear gas canisters were heavily fired by the Israeli soldiers stationed in military vehicles and by drones hovering over the protesters in the eastern Gaza Strip. PCHR hereby condemns these crimes committed by the Israeli forces, believing it is as a result of Israel’s enjoying impunity thanks to the U.S. and so encouraging the Israeli forces to commit further crimes upon an official decision by the highest military and political echelons.

PCHR also stresses that this ongoing policy by Israel violates the Rome STATUTE OF THE INTERNATIONAL CRIMINAL COURT (ICC) and Fourth Geneva Convention, and its practices qualify to war crimes.

Thus, PCHR calls upon the ICC Prosecutor to open an official investigation into these crimes in addition to prosecuting and holding accountable all of those involved in issuing decisions and orders in the Israeli forces at the political and security level and those applying the orders.