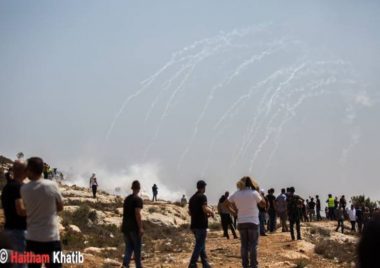 Israeli soldiers injured, Friday, a child, only 12 years of age, with a concussion grenade in his head, during the weekly nonviolent procession against the Annexation Wall and Colonies, in Ni’lin village, west of the central West Bank city of Ramallah.

Dozens of Palestinians, accompanied by Israeli and international peace activists, held the weekly procession in the village, and headed towards the Palestinian orchards isolated behind the illegal Annexation Wall.

Furthermore, Rateb Abu Rahma, the coordinator of the Popular Committee against the Wall And Colonies in nearby Bil’in village, called for ongoing nonviolent processions against the Wall and colonies, and for massive participation in the processions taking place in the village of Ras Karkar, Kafr Ni’ma and Kharbatha al-Misbah, to foil an Israeli plan to build an illegal colony in ar-Reesan Palestinian Mountain, after colonialist settlers installed an outpost.

The mountain is located strategic area overlooking large areas of Palestinian communities, lands and orchards, and Israel is trying to confiscate it for its illegal colonialist activities.