PCHR: “Around 70 Airstrikes within 12 Hours… Israel Violates the Gaza Strip” 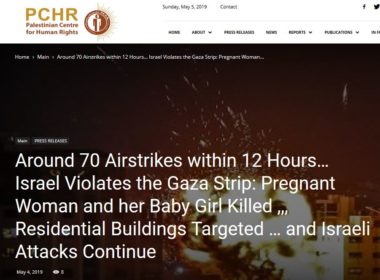 The Israeli forces escalated their attacks against the Gaza Strip and continued to carry out intense airstrikes and shelling throughout the Gaza Strip. Moreover, the Israeli warplanes continue until the moment to target residential buildings in central Gaza neighborhoods in a serious escalation forewarning of more casualties.

This wave of escalation came after a bloody day in which the Israeli forces killed four Palestinians.  Two of them were civilians, including a person with a disability, who were targeted with live ammunition during their participation in the Great March of Return and Breaking the Siege, east of Khan Younis and al-Bureij refugee camp.

Meanwhile, the other two were members of the Palestinian armed groups who were in a military site that was targeted in eastern Maghazi refugee camp shortly after the Israeli forces announced that two Israeli soldiers were wounded in a Palestinian shooting, east of al-Bureij.

The Israeli airstrikes and artillery shelling then continued across the Gaza Strip. According to our fieldworkers (until 21:30), the Israeli forces fired 50 artillery shells and 78 missiles at 76 targets, including two residential buildings, 11 agricultural plots, and the Palestinian armed groups’ military sites and checkpoints that were previously targeted more than once.

At approximately 17:55 on the same day, an explosion of still-undetermined origin occurred in al-Zaytoun neighbourhood in eastern Gaza City.  As a result, a 14-month-old toddler, Saba Mahmoud Hamdan Abu ‘Arar , and a 5-month pregnant woman, Falastine Saleh Abu ‘Arar (37) as well as her fetus were killed.  Moreover, Ma’azouzah Mohammed Abu ‘Arar (72) and Hussam Adnan Abu ‘Arar (2 years) were wounded.  Meanwhile, PCHR’s staff is still investigating the circumstances of the explosion.

The airstrikes also resulted in the killing of a member of the Palestinian armed groups in the northern Gaza Strip while 12 other Palestinians were wounded, including a woman.

Simultaneously with the preparation of this press release, the Israeli forces destroyed two buildings, which included residential apartments, offices and media offices in Al-Remal neighborhood in Gaza City.  As a result, the building was completely destroyed and the residents were displaced.

In addition to the destruction caused by the Israeli airstrikes against the targeted locations and the damage to nearby houses and facilities, the explosions caused widespread panic and fear among the Gaza population, especially women and children, recalling their harsh experiences in the 3 last offensives on Gaza (2008-2009, 2012 and 2014.)

While preparing this press release, the Israeli airstrikes and shelling continued to target residential buildings in densely-populated neighborhoods, inflicting more casualties and destruction.  All of this has been followed up by PCHR’s staff spread all over the Gaza Strip to document and investigate the circumstances of those crimes.

As part of their ongoing policy of collective punishment, the Israeli forces declared the closure of the Kerem Abu Salem Crossing, east of Rafah, the only commercial crossing in the Gaza Strip, and Beit Hanoun “Erez” Crossing for individuals in the northern Gaza Strip. It also announced completely closing the Sea, and prevented fishermen from sailing and fishing, starting at 16:30 today, depriving thousands of fishermen of their livelihoods.

In light of the continued strikes and indicators of escalating the aggression, PCHR warns that civilians are paying dearly and the successive airstrikes have turned more than two million Palestinians into hostages to aggression, fear, anxiety and direct targeting.

PCHR condemns the ongoing wave of escalation and fears the possibility of further deterioration. PCHR emphasizes that the Israeli ongoing airstrikes against the densely-populated areas and use of weapons on the basis of collective reprisal constitute grave violations of the four Geneva Conventions of 1949,and amount to war crimes.