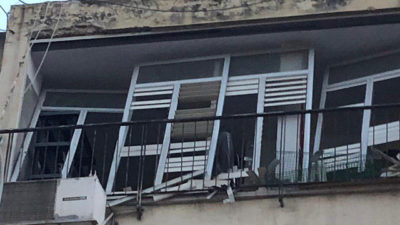 As Israeli forces continue their massive escalation in the Gaza Strip, Palestinian resistance groups responded by launching hundreds of small-scale rockets across the border between Gaza and Israel, killing four Israelis and wounding at least eight.

The Israeli daily Yedioth Ahranoth reports that Pinchas Menachem Prezuazman, 21, was killed by a rocket fired toward the Israeli city of Ashdod, on the coast of Israel, on Sunday evening.

Accordin to Ynet, “Prezuazman was walking in the street when he heard the air-raid siren and ran to seek cover in a nearby building but was hit by shrapnel when he entered the stairwell.”

Prezuazman’s killing marked the fourth death of an Israeli on Sunday.

Earlier in the day, Moshe Feder, 68, was killed in Kfar Saba by an anti-tank mortar fired from Gaza across the border.

In Ashkelon, a city located about 14 kilometers north of Gaza, two Israelis were killed. One, Moshe Agadi, 58, was killed in the early hours of Sunday morning.

The other, Ziad Alhamamda, 50, was killed during the day while working at a factory in Ashkelon. He was a Palestinian Bedouin from the unrecognized Negev village of as-Sawaween.

Israeli forces have reportedly killed 26 Palestinians during the past three days – four on Friday, four on Saturday, and 18 on Sunday.

According to the Israeli military, an estimated 600 rockets were fired from Gaza toward Israel on Saturday and Sunday, most of which were intercepted by the ‘Iron Dome’ defense system .

A military spokesperson told Ynet, “Two hundred rockets were fired at residential areas, with an interception rate above 86 percent”.

The Palestinian shells are crude and mostly homemade, with no ability to make precise aiming. The damage done by these rockets is far less than the missiles dropped by Israel into the Gaza Strip — although they can be deadly if there is a direct hit.