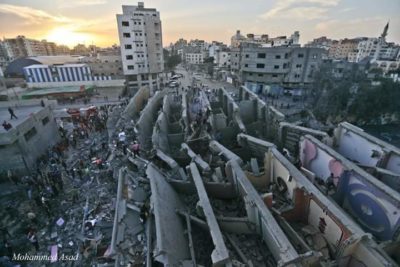 The Palestinian Ministry of Health has confirmed the deaths of 23 Palestinians, including a family – mother, father and 4-month old baby, killed by Israeli missile strikes on residential areas in Gaza.

Palestinian and Israeli media sources have reported that 23 Palestinians and 4 Israelis were killed since the Israeli offensive began on Saturday, as Israeli forces escalated their bombardment of the Gaza Strip, and Palestinian resistance groups fired more rockets into Israel.

Within the list of the Palestinians killed were two pregnant women (some media sources have added the two names of the fetuses to the casualty list).

The escalation of airstrikes occurred after Israeli Prime Minister Binjamin Netanyahu met with his cabinet and announced that he would increase his assault on the besieged coastal strip, where 2 million Palestinians live in the world’s largest open-air prison.

According to Haaretz, the army spokesperson said the military has struck 260 “targets” in several parts of the Gaza Strip. Ha’aretz also reported that Energy Minister Yuval Steinitz ordered a temporary halt of the pumping of natural gas from the Tamar field off the coast of Gaza – a gas field which Palestinians say should belong to them, but which Israel claimed several years ago and has been pumping for gas since then.

Authorities say they fear the gas rig being targeted by Palestinian resistance fighters.

According to the Palestinian Ministry of Health, Abdel Rahim Mustafa Taha Al-Madhoun  and Hani Hamdan Abu Sha’ar, 37, were killed by Israeli missiles in the  northern Gaza Strip.

Four civilians, including a pregnant woman and her two children, were killed in an overnight raid on the town of Beit Lahia in the northern Gaza Strip. They were identified as: Abdullah Abdul Rahim Al Madhoun, 22, Fadi Ragheb Badran, 31, and Shahida Amani Al-Madhoun (33 years old), who was killed along with her unborn baby – she was nine months pregnant.

In addition to the three killed,  eight others were reportedly injured in the Israeli  airstrike, which targeted Al-Faraj Sheikh Zayed in Beit Lahia in the northern Gaza Strip.

Two Palestinian civilians were reportedly killed in the shelling of Rafah. They were identified as Mousa Muammar, 24, and Ali Abdul Jawad, 51 years old. Three people were seriously injured in that same airstrike, which  targeted a residential building in the city of Rafah.

Two apartments were destroyed in Tower No. 10 in the Sheikh Zayed Towers in the northern Gaza Strip.

The Ministry of Health also announced that two people were killed in a bombardment targeting agricultural land behind Ibrahim al-Maqadma Mosque in Al-Bureij refugee camp in the central Gaza Strip.

Two Palestinians were killed in that airstrike, they were identified as Mohammad Abdul Nabi Abu Armaneh, 30, and Mahmoud Samir Abu Armanah, 27.

Both were taken to the Al-Aqsa Martyrs’ Hospital in Deir Al-Balah .

Earlier, Israeli planes carried out the first extrajudicial assassination in the current escalation by shelling a car belonging to Hamed al-Khudari, 34. He was targeted allegedly for transporting money from Iran to Gaza. Two other Palestinian fighters were killed in a separate airstrike around the same time.

In the official statistics, the Ministry of Health said that 10 people have been killed on Sunday and more than 95 people were injured as a result of the ongoing Israeli escalation for the second day in the Gaza Strip.

Ma’an News reported that four Palestinians were wounded when Israeli artillery shelled the house of the Awad family in al-Fakhari area east of Khan Yunis in the southern Gaza Strip.

Two civilians were wounded by shrapnel targeting civilians east of Al-Shojaeya neighborhood in the east of Gaza.Israeli aircraft targeted a house in the Nuseirat refugee camp in the central Gaza Strip and an iron workshop belonging to the Abu Zour family in the Zeitoun neighborhood south of Gaza City.

Israeli Channel 7 News said Palestinian shells struck a factory in Ashkelon (Asqalan) on Sunday, killing two Israelis, 49 and 22 years of age, who remained unidentified at the time of this report, and one man was moderately injured.

An Israel man, identified as Moshe Agadi, 58, was also killed in the early hours of Sunday morning by a shell fired from the Gaza Strip.