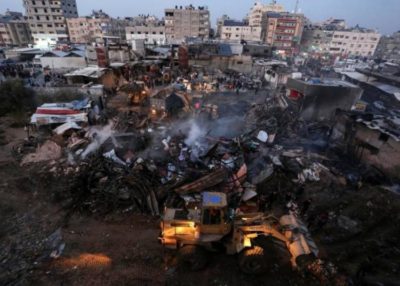 The Palestinian Centre for Human Rights continues to monitor, with great pain, the consequences of the catastrophic fire at Nusairat camp that took place on 05 March 2020 in a densely populated area at the heart of Nusairat refugee camp market. As a result of the unfortunate event, 19 civilians, including 4 children and 4 women, died and 66 others were wounded. Additionally, the fire caused grave damage to properties, including shops, vehicles, and street vendors.

PCHR investigated the incident thoroughly its fieldworkers met with dozens of eyewitnesses. Accordingly, it appears that the fire was the result of blast explosion of a gas tank (capacity 2000kg), that was at 1,340kg; the tank was used as a reserve at al-Bana Bakery, and it was stored approximately 20m behind the bakery. The gas tank was the property of al-Mashharawi Gas Company.

The fire extended into a nearby carpenter shop, which had incendiary materials inside and then expanded onto nearby shops, manufacturing establishments, houses, street vending stalls, NGOs and vehicles.

The fire caused grave damage to citizens’ properties, including 20 manufacturing and trade establishments, 42 street vendors and 16 vehicles. Eyewitnesses confirmed that they heard a blast explosion, followed by pillars of white smoke shooting up the sky, before the big explosion of the gas tank and expansion of the fire.

Ambulances arrived at the scene within 10 minutes and started to transport victims, while the Civil Defense Firetrucks arrived within 25 minutes, but were unable to control the fire. Approximately 1 hour later, help arrived in the form of private companies’ construction and water distribution vehicles who helped put out the first which kept going for several hours.

The Ministry of Interior and National Security in the Gaza Strip issued a press release on 05 March 2020, that clarified that concerned bodies are conducting necessary investigations to identify the causes of the incident.

According to former Nusairat Mayor[1]’s, Mohammed Yusuf Abushekan, statement to PCHR fieldworker, the fire was caused by a gas leak from al-Bana Bakery’s reserve, which is in a densely populated area. He added that the High National Technical Committee for Work Safety, members include Nusairat Municipality, Civil Defense, Palestinian General Federation of Trade Unions, and the Ministries of Health, Work and National Economy, had conducted a field inspection visit to all bakeries in Nusairat on 25 February 2020, including al-Bana Bakery.

This visit is part of the standard protocol for renewing licenses, which aims at ensuring the bakeries are inline with the health and safety standards. He added that al-Bana Bakery’s owners were asked to conduct several safety measures, including using gas cylinders daily, refrain from storing multiple gas cylinders in the bakery and to improve the electric network.

The Bakery was given 2 weeks to meet the Committee’s conditions and obtain concerned authorities’ approval in order to renew their annual license, to which the owners provided a written pledge; however, the incident took place within the 2-week grace period.

Ahmed al-Bana, the owner of al-Bana Bakery, stated to PCHR that his bakery was established in 2012 on an area of 450 m2 and it had 42 employees (workers and management), 22 of whom were present at the time of the fire. Al-Bana said that the bakery has 2 large gas tanks, capacity 2000kg/each, and one of them was in use at the time, next to it there were 24 gas cylinders (capacity:24kg each).

The other gas tank was a reserve, stored 20m away from the bakery (south) and it had 1340 kgs. Al-Bana added that he heard an explosion that was followed by another that extended to the reserve and on towards neighboring establishments, shops and vehicles.

One of the Bakery’s owners was wounded in the fire, and later died, Osama al-Bana (47); while six workers were wounded in the fire and 2 in critical condition. He added that the Bakery received members of the National Technical Committee on 25 February 2020, who inspected the premises to verify it is fit to run operations and to renew its 2020 license.

The Committee advised the Bakery to fix its power grid, remove empty gas cylinders from their former location behind the Bakery; yet, he confirmed that none of the recommendations concerned the gas tank kept in the area behind the bakery, insisting that they had seen it and examined it.

PCHR team had visited the tragic scene of the fire and collected testimonies from official bodies responsible for licensing manufacturing and trade establishments, as well as testimonies of the bakery’s owners, and victims and their families. Thereby, PCHR reiterates that: