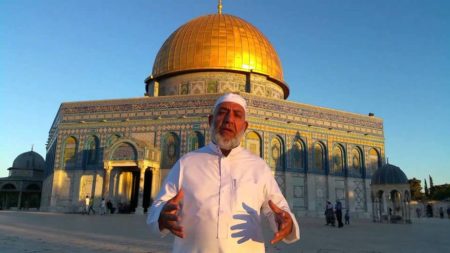 The Israeli police, on Sunday evening, arrested Sheikh Najeh Bukairat, deputy director of the Administration of Islamic Awqaf and Aqsa Mosque Affairs, from his home in Sur Baher neighborhood, in East Jerusalem, Days of Palestine reported.

The Administration of Islamic Awqaf and Aqsa Mosque Affairs in Occupied Jerusalem, announced on Sunday, its decision to shut down all the Al-Aqsa Mosque’s enclosed prayer buildings until further notice as a precaution to prevent the spread of coronavirus.

Sheikh Omar al-Kiswani, director of the Al-Aqsa Mosque, said that all prayers would be held in the open areas of the Aqsa Mosque, adding that the holy site’s doors would remain open to Muslim worshipers.

In related news, the Israeli authorities, on Sunday, closed doors to Palestinian muslim worshipers, allegedly to slow the spread of the Corona virus, while allowing the illegal Israeli settlers to storm the sacred Islamic holy site.