PCHR: Excessive Use of Force and Collective Punishment: IOF Kills 3 Palestinians and Destroys a Prisoner’s House in Less than 24 Hours 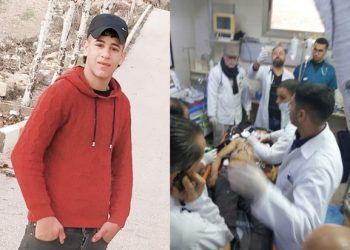 The Palestinian Center for Human Rights (PCHR): The newest Israeli killing of Palestinians under its policy of excessive use of force, the Israeli occupation forces (IOF) killed 3 Palestinians and wounded 8 others in less than 24 hours in Jenin and Hebron, north and south of the West Bank.

Of the Palestinians killed, 2, including a policeman, were shot and killed during an IOF raid into Jenin to demolish a prisoner’s house, for the second time. This falls under the Israeli policy of collective punishment employed against families of Palestinians accused of carrying out attacks against Israeli soldiers and/or settlers. Meanwhile, the third Palestinian was killed by an Israeli sniper in a protest in Hebron.

According to PCHR investigations, at approximately 1:30 on Thursday, 06 February 2020, IOF, backed by 20 military and construction vehicles, moved into al-Basateen neighborhood north of Jenin.

The soldiers were deployed among civilian houses and topped the roofs of some while 30 of them raided Palestinian prisoner, Ahmed Jamal Ahmed al-Qumbo’s,  house (220 sqm, home to 8 persons, including 2 children) to execute a demolition order issued by an Israeli court 48 hours prior. Al-Qumbo’ has been arrested since 17 January 2018, and the house was built only 9 months ago following IOF’s earlier demolition.

The soldiers did a thorough search of the house with a large number of police dogs; afterwards, the Israeli bulldozers proceeded to level the house to the ground. During the demolition, a number of Palestinian civilians gathered and threw stones and empty bottles at IOF military vehicles present at the scene.

Immediately, IOF responded with live and rubber bullets and toxic tear gas canisters; the situation quickly escalated. As a result of the Israeli shooting, 2 Palestinians were killed, one on the spot and the other succumbed to his wounds hours later, and 7 were wounded. The two killed were identified as 1. Yazan Monther Khaled Abu-Tabykh (19), a university student from Wad Bourqin area west of Jenin, was shot with a live bullet in the chest and killed immediately; and 2. Tariq Loay Ahmed Badwan (24), a Palestinian police officer from Qalqiliyah, was shot with a live bullet in the abdomen while inside the police station. He was transferred to the hospital where his condition was classified as critical and he was pronounced dead at 11:40 on Thursday.

It should be noted that IOF detonated prisoner al-Qumbo’s house for the first time on 24 April 2019, under the pretext of being charged with involvement in the killing of an Israeli settler, Arail Shefeh, from “Hefat Gilad” settlement, southwest of Nablus, on 09 January 2018.

At approximately 16:00 on Wednesday, 05 February 2020,  an Israeli sniper stationed on a building’s roof near Israeli Military Checkpoint (56) established on al-Shuhada’a Street, fired 3 live bullets at Mohammed Salman Ta’mah al-Haddad (17)  from a distance of 100 meters as Mohammed was near an old market, 50 meters away from the checkpoint’s entrance.

As a result, Mohammed was shot and injured with a live bullet in the heart and fell on the ground. A number of young men managed to reach Mohammed and transferred him via an ambulance to Hebron Governmental Hospital.

A few minutes later, doctors pronounced Mohammed’s death after being shot with a live bullet that penetrated his heart and caused severe bleeding. The shooting was reported during a protest organized by dozens of young men, who threw stones at IOF and burned tires near the abovementioned checkpoint.

These crimes are part of IOF’s grave escalation in the oPt since the U.S President Trump declared his Middle-East Peace Plan known as “the Deal of the Century” on 28 January 2020. IOF suppressed more than 60 protests against Trump’s plan at seam points confrontation in the West Bank, including occupied East Jerusalem.

As a result, dozens of civilians were shot and injured with live and rubber bullets in addition to many others suffocated due to tear gas inhalation.

PCHR strongly condemns the IOF’s crimes, which prove the ongoing Israeli use of excessive force against Palestinian civilian, who did not pose danger or threat to the soldiers’ lives.

PCHR condemns the crime of demolishing Qombo’s house for the 2nd time as part of IOF’s collective punishment policy against the Palestinian civilians.

PCHR reminds that this policy is internationally prohibited according to Article 33 of the Fourth Geneva Convention, which states that: “No protected person may be punished for an offense he or she has not personally committed. Collective penalties and likewise all measures of intimidation or of terrorism are prohibited. Pillage is prohibited. Reprisals against protected persons and their property are prohibited.”

Therefore, PCHR reiterates its call upon the international community to take immediate action to put an end to the Israeli crimes. PCHR also reiterates its call upon the High Contracting Parties to the 1949 Fourth Geneva Convention to fulfill their obligations under Article 1; i.e., to respect and ensure respect for the Convention in all circumstances and their obligations under Article 146 to prosecute persons alleged to commit grave breaches of the Fourth Geneva Convention.