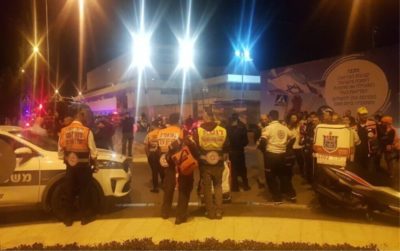 A car driven by an unknown assailant plowed through a group of soldiers who were standing on a sidewalk, in Jerusalem, just before 2 am, Thursday morning, injuring 12 of the soldiers, one critically.

The driver has apparently been apprehended and taken into police custody.

Sand Al-Turman is a 25-year-old East Jerusalem resident with no prior security violations to his name. Shortly before the attack, he allegedly published a Facebook post, saying he has “found the answers,” Ynet Israeli news site reports.

One of the 12 soldiers, who were all from the Golani Brigade, was seriously wounded and underwent surgery, while another sustained moderate wounds. The other troops 10 were lightly injured.

02/06/20 Car Plows Through A Group of Israeli Soldiers in Jerusalem, Injuring 12