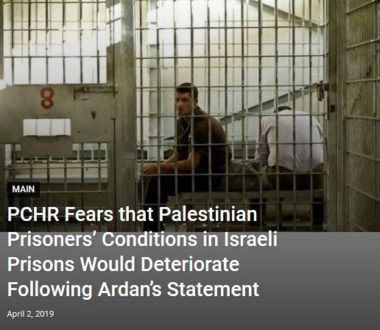 According to information obtained by PCHR, in case the prisoners declared their hunger strike on Sunday, 07 April 2019, it would be gradually as 50 prisoners, including leaders of Palestinian factions, will start a dry hunger strike.

In case of not responding to their demands, the hunger strike will go on until declaration of a comprehensive strike in all prisons on 17 April, which marks the Palestinian Prisoner’s Day.

The hunger strike, which is the hardest choice for the prisoners, comes after the IPS has imposed tightening measures against the detainees and prisoners and deprived them of their most basic human rights that are guaranteed under international laws and standards.

PCHR is concerned that in case the prisoners went on the hunger strike in the Israeli prisoners, the IPS would use new suppressive and punitive measures against them.

Thus, PCHR calls upon the international community to practice pressure on the Israeli government to oblige it to comply with the international standards and principles which protect prisoners and maintain their rights and dignity.