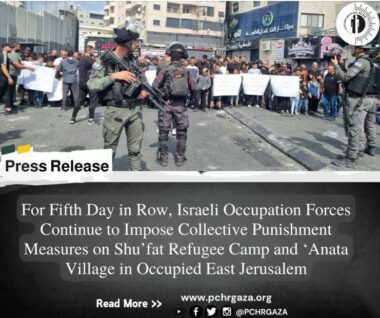 The Palestinian Center For Human Rights (PCHR): For the fifth day in a row, the Israeli Occupation Forces (IOF) continue to impose a siege on Shu’fat refugee camp and ‘Anata village in Occupied East Jerusalem, including the closure of entrances and military checkpoints, as part of collective punishment measures against tens of thousands of people.

According to investigations conducted by the Palestinian Centre for Human Rights (PCHR), on Saturday, 08 October 2022, IOF completely closed the entrances to Shu’fat refugee camp and ‘Atana village in occupied East Jerusalem, as part of their collective punishment policy following a shooting carried out by a young man at the IOF stationed at Shu’fat camp’s checkpoint after the young man stepped out of a vehicle passing by the area.  As a result, a female soldier was killed, and 2 other soldiers were wounded.  Also, IOF arrested four Palestinians while crossing the checkpoint at the entrance to ‘Atana village.

IOF moved into the camp amid violent clashes with Palestinians. As a result, a Palestinian was shot with a rubber-coated bullet, and tens of others suffocated. Additionally, IOF arrested three Palestinians, including a woman.

Next morning, 09 October 2022, IOF continued a complete closure of the entrances to the Shu’fat camp and ‘Anata village, blocking movement in and out of them and turning them into a military outpost. Also, they spread into groups all over the camp’s streets and alleys.

Due to the measures imposed, the daily life in the camp and the village was disrupted as employees, workers and students were unable to go to their workplaces and schools. In the evening, IOF raided and searched several mosques and dozens of shops and confiscated the recorders of the surveillance cameras.

During their widescale raids, IOF arrested 15 Palestinians from Shu’fat camp and ‘Anata village.

Next day, 10 October 2022, IOF imposed-closure on Shu’fat and ‘Anata village continued, as they conducted widescale raids of houses and shops, confiscated the recorders of surveillance cameras, and arrested 4 Palestinians from al-Tamimi family, including the parents of ‘Odai al-Tamimi (22), whom the Israeli media accused of carrying out the shooting at the checkpoint. Also, IOF raided and took photos of all houses and shops belonging to al-Tamimi family.

Moreover, two Palestinians were wounded during IOF’s suppression of Palestinians protesting against the punitive measures imposed on Shu’fat camp and al-Salam Suburb in occupied East Jerusalem.

On Tuesday, 11 October 2022, IOF continued their closure on the camp and village, disrupting all aspects of life and denying employees and students’ access to their workplaces and schools for the third day. In the morning, IOF raided ‘Odai al-Tamimi’s house in al-Salam Suburb in ‘Anata village and took its measurements as a prelude to demolish it.

IOF’s incursions into the neighborhoods and streets of the camp and ‘Anata village recurred several times during the day, enticing anger among the residents of the area who gathered in the evening on the camp’s streets and decided civil disobedience and a comprehensive strike all over the area, calling on all Jerusalem neighborhoods to go on a strike until IOF end their collective punishment policy against the residents of the area.

Afterwards, hundreds participated in a mass protest that made its way to the camp’s checkpoint chanting national slogans. When they reached the checkpoint, IOF suppressed the protest by firing rubber-coated metal bullets, tear gas canisters and stun grenades at the protesters.  IOF summoned skunk carrying vehicles that broke into the camp’s streets and alleys and pumped skunk water at the residential houses and shops.

Up to publishing this press release, IOF continue to lock down and impose a closure on Shu’fat refugee camp and ‘Anata village, where they conducted raids and arrests. Due to this closure, the fieldworker could not determine the final number of arrestees, but the initial reports say that at least 25 Palestinians were arrested within the past few days.

The mayor of ‘Anata, Taha No’man, stated that IOF have turned ‘Anata, Ras Khamis, Shuafat refugee camp and Ras Shehada into a prison as the IOF’s collective punishments target 130,000 people distributed over the mentioned areas, disrupting all aspects of life.

As a result, 30,000 Palestinians could not go to work, and more than 4000 students could not attend schools.

PCHR condemns the IOF’s collective punishment measures and repressions against the Palestinians, and recalls Article 33 of the Fourth Geneva Convention, which states that: “No protected person may be punished for an offense he or she has not personally committed. Collective penalties and likewise all measures of intimidation or of terrorism are prohibited. Pillage is prohibited. Reprisals against protected persons and their property are prohibited.”

PCHR also calls upon the High Contracting Parties to the 1949 Fourth Geneva Convention to fulfill their obligations under Article 1; i.e., to respect and ensure respect for the Convention in all circumstance. PCHR believes that the conspiracy of silence practiced by the international community encourages Israel to act as a state above law and to commit further violations of international human rights law and international humanitarian law.