Update: Israeli Soldiers Shoot A Palestinian In Ramallah, Abduct Another Near Safit 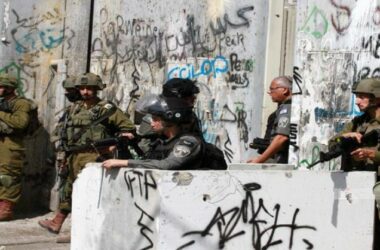 On Wednesday, Israeli soldiers shot a young man near Ramallah and abducted two near Salfit in the occupied West Bank.

Dozens of Palestinians held a procession at the northern entrance of Al-Biereh city near Ramallah, protesting the Israeli military escalation in the West Bank, especially in the Shu’fat refugee camp in occupied Jerusalem.

Medical sources said the soldiers shot a young man with a live round in the leg before he was rushed to a hospital; his condition was described as stable.

Furthermore, the soldiers abducted Mohammad Rayyan and Qaisar Salah, from Qarawat Bani Hassan town, west of Salfit, while working at a construction site.