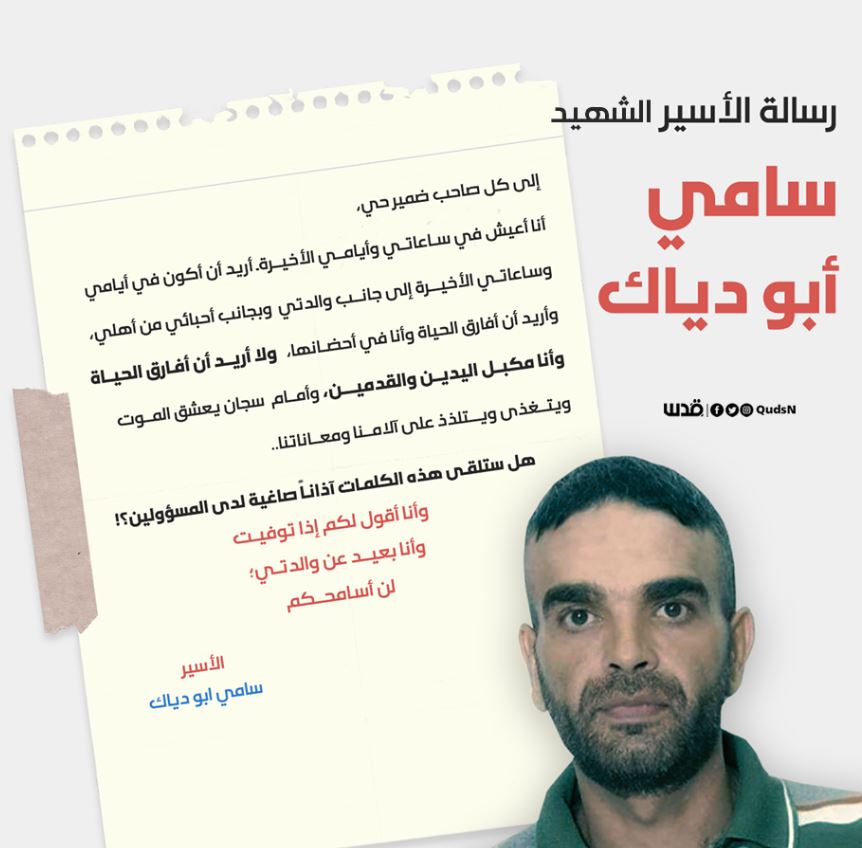 On Tuesday morning, 26 November 2019, Palestinian prisoner, Sami Abu-Diak, 36, died at al-Ramla prison clinic. Abu-Diak, from Silat al-Dahr village near Jenin, had spent 17 years in Israeli prison, and was recently transferred to the clinic in Israel due to his deteriorating health condition, having cancer since 2015.

PCHR condemns the Israeli neglect of numerous calls for Abu-Diak’s release, as is standard in humanitarian cases like his, despite knowledge of his ailing health, choosing to leave him to die in prison.

Israeli forces refused all calls by human rights groups and others to release Abu-Diak, and kept him in custody at al-Ramla prison clinic, commonly referred to as “the slaughterhouse” in reference to the poor treatment and care provided at it, despite knowledge of his ailing health.

Abu-Diak’s legs and arms were cuffed to his bed. Israeli forces had scheduled a hearing for his release request on 02 December 2019; unfortunately, Abu-Diak did not survive.

Abu-Diak is the 4th Palestinian prisoner to die in Israeli prisons in 2019. On 06 February, Fares Mohammed Baroud, 51, who spent 28 years in the Israeli jails, from al-Shati’ refugee camp in western Gaza City, died only hours after being transferred from “Ramon” Prison to “Soroka” Hospital in circumstances raising suspicions of deliberate medical negligence by the Israeli authorities.

Also on 16 July, Nassar Majed Taqatqah, 31, from Beit Fajjar village, south of Bethlehem, died while in solitary confinement in “Nitzan” Prison (al-Ramlah) in Israel. Israeli forces arrested the late Nassar from his house on 09 June 2019 and investigated him.

While Bassam al-Sayeh, 47, from Nablus, died on 08 September 2019, under circumstances that are suspicious of an intentional medical neglect by the Israeli authorities, especially that the deceased suffered from bone cancer before his arrest and his condition deteriorated while in custody. His condition further deteriorated and he was pronounced dead at Assaf Harofeh medical centre in Israel.

PCHR holds the Israeli government fully responsible for the death of Abu-Diak, and for the lives of dozens of sick prisoners who would face the same fate if the policy of deliberate medical negligence continues, especially under the inhumane imprisonment conditions in which prisoners are subject to physical and psychological torture in addition to the denial of healthcare.