Soldiers Shoot A Palestinian With A Live Round, Injure Several Others, Near Ramallah 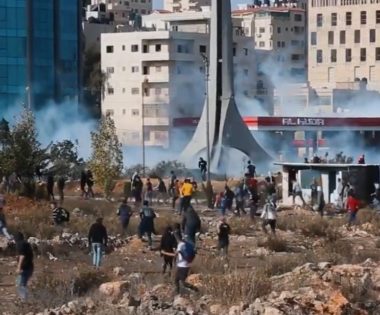 Israeli soldiers attacked, Tuesday, dozens of Palestinian protesters at the northern entrance of the al-Biereh city, near the central West Bank city of Ramallah, and fired live rounds, rubber-coated steel bullets and gas bombs at them, wounding one with live ammunition and causing many to suffer the effects of teargas inhalation.

Hundreds of Palestinians marched in the area, denouncing the illegal American polices, and the hostile positions and decisions of the Trump administration, denying the basic internationally guaranteed rights of the Palestinian people, who aspire freedom, independence and sovereignty on their own land, and the latest statements recognizing the Israeli colonies, built on occupied Palestinian lands in direct violation of International Law.

The soldiers resorted to the excessive use of force against the protesters, especially with the use of live round, and the barrage of gas bombs and concussion grenades, in addition to the rubber-coated steel bullets.

In related news, the soldiers injured many Palestinians during a protest near Huwwara military roadblock, south of the northern West Bank city of Nablus.

The soldiers also shot two Palestinians with rubber-coated steel bullets, and abducted two teenage boys, during a procession at the northern entrance of Bethlehem city, south of occupied Jerusalem, in the West Bank.