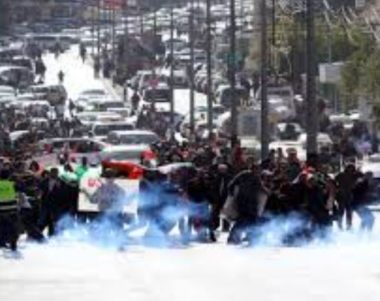 Israeli soldiers shot, Tuesday, two Palestinians with rubber-coated steel bullets, and abducted two teenage boys, during a procession at the northern entrance of Bethlehem city, south of occupied Jerusalem, in the West Bank.

They added that the soldiers chased several protesters and abducted two teenage boys who remained unidentified at the time of this report.

The procession was held by hundreds of Palestinians who marched from Bab az-Zqaq area in Bethlehem and headed towards the northern entrance of the city.

The protesters carried Palestinian flags and chanted against the ongoing and escalating Israeli violations against the Palestinian people, and the illegal annexation of Palestinian lands for the construction and expansion of illegal colonies.

They also marched in condemnation of the illegal American recognition of the Israeli colonies, especially Trump’s declaration that they are legal, although they violate International Law, the Fourth Geneva Convention, and various international resolutions.