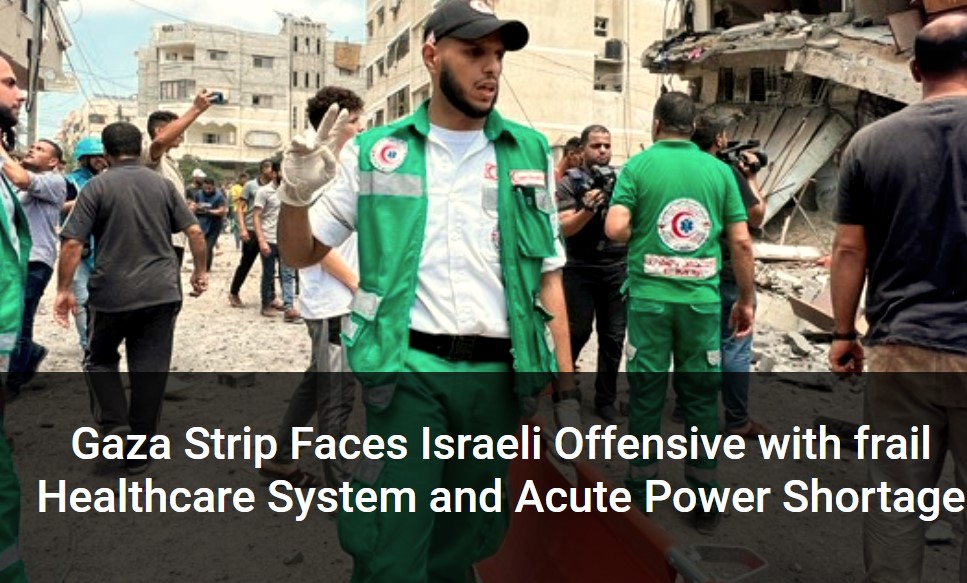 In light of the ongoing Israeli offensive on the Gaza Strip, the humanitarian situation continues to deteriorate, threatening the operation of many vital sectors, particularly heath, electricity, water, sanitation, and public services.

The Israeli offensive coincides with the ongoing closure of Gaza’s crossings to individuals and goods which could result in catastrophic deterioration at all levels.

This perpetuates the collective punishment policy against 2 million Palestinians living in the Gaza Strip in grave breach of the international humanitarian law, particularly the 1949 Fourth Geneva Convention.

The statement by the Israeli Defense Ministry Benny Gantz on 03 August 2022, when he linked the Gaza residents’ humanitarian and living conditions with the security situation further proves the Israeli continued collective punishment and retaliatory policy against civilians.

Regarding the health situation, healthcare sector in the Gaza Strip is facing the new Israeli offensive with hospitals that already suffers lack of specialized medical personnel and chronic shortage of the essential drugs list; 219 out of 522 stupes (i.e., 40% of the list).

Additionally, Israeli authorities have procrastinated on allowing the import of the spare parts necessary for the maintenance of inoperative medical devices at the Strip’s hospitals, including endoscopy devices used in surgeries, pneumatic drills to fix complex fractures and MRI and CT devices.

These devices constitute the eyes for doctors and surgeons during their urgent surgeries, particularly for those injured during the ongoing Israeli offensive.

The ongoing restrictions on the entry of medicines, medical devices and spare parts for the inoperative devices hinders the work of medical personnel at the emergency departments, operating rooms, and intensive care units in order to provide healthcare for the wounded.

Furthermore, for the fifth day on a row, IOF still prevents hundreds of cancer patients and those seriously wounded in the current offensive whose treatment is not available at Gaza’s hospital from travel for treatment abroad or resume their treatment at hospitals in the West Bank, including occupied East Jerusalem, or in Israel.

This puts patients’ lives at risk and leads to their death. According to the General Authority for Civil Affairs (GACA) data, 100-120 patients daily travel for treatment abroad; thus, the continued closure of the crossing to this category would lead to the premediated murder of tens of patients in light of the Gaza health system’s failure to provide the necessary treatment for them due to the insufficient medical personnel and chronic shortage of medicines and medical supplies such as radiotherapy and laboratory materials necessary for diagnostic tests.

In a serious development, Gaza Electricity Distribution Company (GEDCO) announced that Gaza’s sole Power Plant will shut down at 12:00 on Saturday 06 August 2022 after fuel supplies necessary for its operation were halted due to the closure of Karm Abu Salem “Kerem Shalom” commercial crossing.

With the powerplant shut down, the electricity supply available in the Gaza Strip reduces to 120 megawatts while the Strip’s actual need of the electricity in summer reaches to 500 megawatts, exceeding the deficit to 76%.  This leads to only four hours of electricity per day for every 12 hours of blackouts, rendering it insufficient for the operation of the vital facilities providing basic services to citizens.

The power outage portends cut of potable water supply for long periods and shutdown of sanitation and sewage treatment plants.  This would creat a health hazard due to leakage of sewage water and thereby outbreak of epidemics and diseases and groundwater recontamination.

Dr. Ashraf al-Qedra, Director of the Public Relations and Media at MOH in Gaza, announced in a press conference at noon that the health services will stop soon due to power outage as MOH needs 2500 liters of fuel hourly to operate its facilities, and the available fuel will run out within 72 hours.

Also, power outage will significantly affect the scheduled surgeries at Operation Departments; an average of 3,864 surgeries monthly, ranging from small to medium and major surgeries.

These surgeries are operated in 48 operating rooms across Gaza hospitals. However, this poses risk to patients in the Intensive Care Units (ICU), where bed occupancy rate is (80%), noting that the lives of those patients mainly depend upon ventilators. Additionally, power outage prominently affects the hemodialysis departments at the Gaza hospitals, which only have 131 dialysis machines serving 923 dialysis patients across the Gaza Strip governorates.

At the height of this serious escalation and in light of the completely disrupted daily life in the Gaza Strip, deteriorating humanitarian situation and suffering of 2 million Palestinians living in the Strip, PCHR: