PCHR: “In New Crime of Excessive Use of Lethal Force, IOF Kill Palestinian Child and Injured 7 Others, Including 5 Children in Eastern Khan Younis” 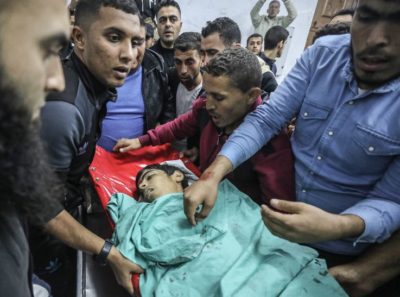 According to Information provided for the Palestinian Center for Human Rights (PCHR), at approximately 14:45 on Friday, 29 November 2019,  around 300 Palestinian civilians took part in the Great March of Return (GMR) camps in Khuza’a village, east of Khan Younis, despite that the GMR’s Supreme National Authority canceled the protests on the abovementioned day.

Dozens of civilians, including young men and children, approached the border fence, chanted national slogans and raised the Palestinian flags, while some protestors attempted to threw stones.

IOF stationed along the border fence fired live and rubber bullets and tear gas canisters at the protestors. As a result,  Fahed Walid Mohammed al-Astal (16), from Khan Younis, was deemed critical, was shot with a live bullet in the abdomen.

At approximately 15:08, al-Astal was transferred to Gaza European Hospital. Al-Astal died after a short time of his arrival at the hospital. Moreover, 7 civilians were injured, including 5 children, after they were shot with live and rubber bullets and their injuries were classified as moderate.

PCHR documented 215 killings by Israel since the outbreak of the protests on 30 March 2018, including 47 children, 2 women, 9 persons with disabilities, 4 paramedics and 2 journalists. Additionally, 14,713 were wounded, including 3,696 children, 387 women, 253 paramedics, and 218 journalists, noting that many of those injured had sustained multiple injuries on separate occasions.

PCHR strongly condemns this crime, which is a further proof of IOF ongoing use of lethal force against Palestinian civilians even when they pose no threat to Israeli soldiers’ lives.

PCHR calls upon the international community to stop IOF crimes and reiterates its call upon the High Contracting Parties to the 1949 Fourth Geneva Convention to fulfill their obligations under Article 1; i.e. to respect and ensure respect for the Convention in all circumstances and their obligations under Article 146 to prosecute persons alleged to commit grave breaches of the Fourth Geneva Convention.

These grave breaches constitute war crimes under Article 147 of the same Convention and Protocol (I) Additional to the Geneva Conventions on the guarantee of Palestinian civilians’ right to protection in the occupied territory.