PCHR: “IOF Kill 2 Palestinians, including Child, and Wound 15” Others, including 3 Children, during IOF’s Incursion into Jenin Refugee Ca 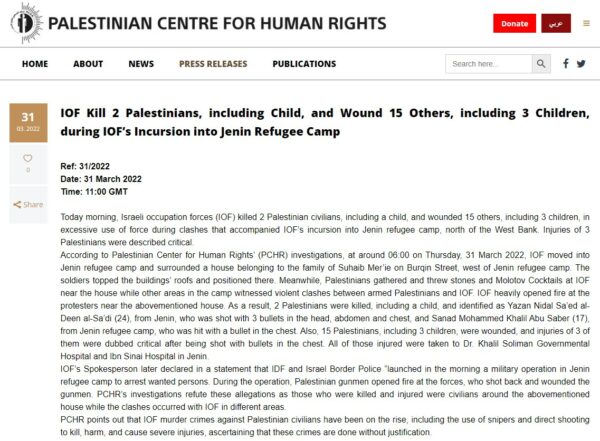 Ref: 31/2022: Date: 31 March 2022, Time: 11:00 GMT: The Palestinian Center For Human Rights (PCGR: Today morning, Israeli occupation forces (IOF) killed 2 Palestinian civilians, including a child, and wounded 15 others, including 3 children, in excessive use of force during clashes that accompanied IOF’s incursion into Jenin refugee camp, north of the West Bank. The injuries of 3 Palestinians were described as critical.

According to Palestinian Center for Human Rights (PCHR) investigations, at around 06:00 on Thursday, 31 March 2022, IOF moved into Jenin refugee camp and surrounded a house belonging to the family of Suhaib Mer’ie on Burqin Street, west of Jenin refugee camp. The soldiers topped the buildings’ roofs and positioned there.

Meanwhile, Palestinians gathered and threw stones and Molotov Cocktails at IOF near the house while other areas in the camp witnessed violent clashes between armed Palestinians and IOF. IOF heavily opened fire at the protesters near the abovementioned house.

As a result, 2 Palestinians were killed, including a child, and identified as Yazan Nidal Sa’ed al-Deen al-Saadi (24), from Jenin, who was shot with 3 bullets in the head, abdomen and chest, and Sanad Mohammed Khalil Abu Saber (17), from Jenin refugee camp, who was hit with a bullet in the chest. Also, 15 Palestinians, including 3 children, were wounded, and injuries of 3 of them were dubbed critical after being shot with bullets in the chest. All of those injured were taken to Dr. Khalil Soliman Governmental Hospital and Ibn Sinai Hospital in Jenin.

IOF’s Spokesperson later declared in a statement that IDF and Israel Border Police “launched in the morning a military operation in Jenin refugee camp to arrest wanted persons. During the operation, Palestinian gunmen opened fire at the forces, who shot back and wounded the gunmen. PCHR’s investigations refute these allegations as those who were killed and injured were civilians around the abovementioned house while the clashes occurred with IOF in different areas.

PCHR points out that IOF murder crimes against Palestinian civilians have been on the rise, including the use of snipers and direct shooting to kill, harm, and cause severe injuries, ascertaining that these crimes are done without justification.

So far in 2022, IOF has killed 19 Palestinian civilians, including 5 children, and wounded 154 others, including 1 woman and 32 children.

PCHR reiterates its call upon the international community to take immediate action to end the Israeli occupation’s crimes, and its call upon the High Contracting Parties to the Fourth Geneva Convention to fulfill their obligations as per Common Article 1 of the Convention, “undertake to respect and to ensure respect for the present Convention in all circumstances.”

PCHR also calls upon the High Contracting Parties to uphold their commitment to Article 146 of the same Conventions, i.e., to hold accountable persons accused of committing grave breaches of the Convention, and to ensure protection for Palestinian civilians in the occupied territory.