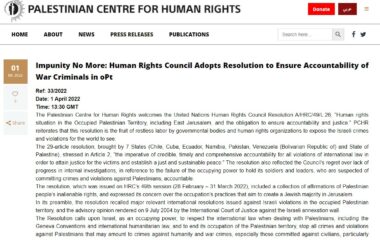 Ref: 33/2022, Date: 1 April 2022, Time: 13:30 GMT: The Palestinian Centre for Human Rights welcomes the United Nations Human Rights Council Resolution A/HRC/49/L.26, “Human rights situation in the Occupied Palestinian Territory, including East Jerusalem, and the obligation to ensure accountability and justice.” PCHR reiterates that this resolution is the fruit of restless labor by governmental bodies and human rights organizations to expose the Israeli crimes and violations for the world to see.

The 29-article resolution, brought by 7 States (Chile, Cuba, Ecuador, Namibia, Pakistan, Venezuela (Bolivarian Republic of) and State of Palestine), stressed in Article 2, “the imperative of credible, timely and comprehensive accountability for all violations of international law in order to attain justice for the victims and establish a just and sustainable peace.” The resolution also reflected the Council’s regret over lack of progress in internal investigations, in reference to the failure of the occupying power to hold its soldiers and leaders, who are suspected of committing crimes and violations against Palestinians, accountable.

The resolution, which was issued on HRC’s 49th session (28 February – 31 March 2022), included a collection of affirmations of Palestinian people’s inalienable rights, and expressed its concern over the occupation’s practices that aim to create a Jewish majority in Jerusalem.

In its preamble, the resolution recalled major relevant international resolutions issued against Israeli violations in the occupied Palestinian territory, and the advisory opinion rendered on 9 July 2004 by the International Court of Justice against the Israeli annexation wall.

The Resolution calls upon Israel, as an occupying power, to respect the international law when dealing with Palestinians, including the Geneva Conventions and international humanitarian law, and to end its occupation of the Palestinian territory, stop all crimes and violations against Palestinians that may amount to crimes against humanity and war crimes, especially those committed against civilians, particularly children and prisoners.

The resolution also sheds light on the Israeli occupation’s practices that aim at tightening control over civil society and human rights defenders that support the Palestinian cause.

PCHR expresses its gratitude to the (37) states that voted in favor of the resolution, including Arab, European, African and Asian States and condemns the position of the States that abstained from voting, including Britain and India, or those that were against the resolution led by the United States, which has been always in denial of the Palestinians’ human rights.

PCHR affirms that such steps taken in this regard by the UN Mechanisms is significant on the way to promote respect for human rights and ensure accountability for the Israeli war criminals after decades of impunity and protection offered by the United States on one hand and to stop the Israeli crimes committed against the Palestinian civilians for decades on the other hand.