PCHR: “IOF Kill Two Palestinian Civilians, Including Child, and Wound Others in Balata and Qalandia Refugee Camps in West Bank” 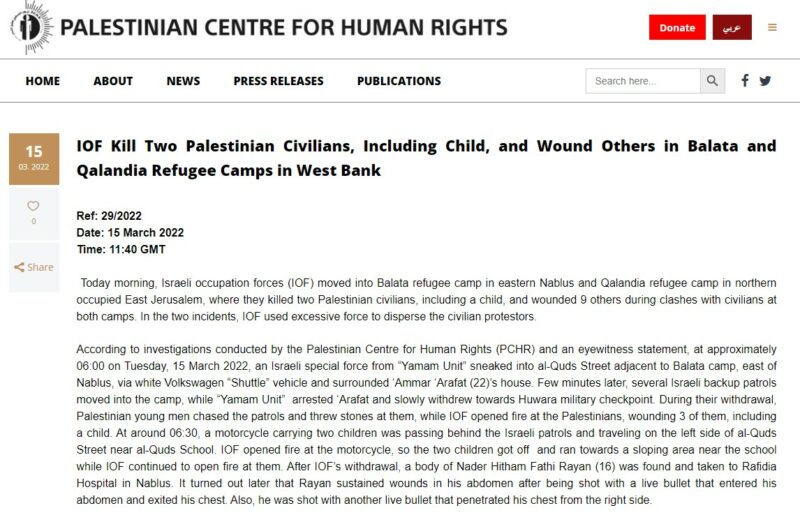 The Palestinian Center For Human Rights: Tuesday morning, Israeli occupation forces (IOF) moved into Balata refugee camp in eastern Nablus and Qalandia refugee camp in northern occupied East Jerusalem, where they killed two Palestinian civilians, including a child, and wounded 9 others during clashes with civilians at both camps. In the two incidents, IOF used excessive force to disperse the civilian protestors.

According to investigations conducted by the Palestinian Centre for Human Rights (PCHR) and an eyewitness statement, at approximately 06:00 on Tuesday, 15 March 2022, an Israeli special force from “Yamam Unit” sneaked into al-Quds Street adjacent to Balata camp, east of Nablus, via white Volkswagen “Shuttle” vehicle and surrounded ‘Ammar ‘Arafat (22)’s house.

A few minutes later, several Israeli backup patrols moved into the camp, while “Yamam Unit” arrested ‘Arafat and slowly withdrew towards Huwwara military checkpoint. During their withdrawal, Palestinian young men chased the patrols and threw stones at them, while IOF opened fire at the Palestinians, wounding 3 of them, including a child. At around 06:30, a motorcycle carrying two children was passing behind the Israeli patrols and traveling on the left side of al-Quds Street near al-Quds School.

IOF opened fire at the motorcycle, so the two children got off and ran towards a sloping area near the school while IOF continued to open fire at them. After IOF’s withdrawal, the body of Nader Haitham Fathi Rayan (16) was found and taken to Rafidia Hospital in Nablus. It turned out later that Rayan sustained wounds in his abdomen after being shot with a live bullet that entered his abdomen and exited his chest. Also, he was shot with another live bullet that penetrated his chest from the right side.

According to PCHR’s investigations and eyewitnesses’ testimonies regarding another murder crime in Qalandia camp, at approximately 07:30 on Tuesday, 15 March 2022, a large Israeli force moved into Qalandia camp, north of occupied East Jerusalem, from two sides. During which, Israeli snipers topped the roofs of houses and residential buildings while IOF raided and searched several houses and arrested Wesam ‘Ataa Abu Latifa and Mohammed Hasan Abu Latifa.

Afterwards, dozens of Palestinian young men gathered on the streets of the camp and topped the roofs of the houses. They threw stones and empty bottles at the soldiers, who fired heavy live bullets at them. As a result, 7 civilians sustained live bullet wounds; one of them was ‘Alaa Mohammed al-Shahaam (24), who was shot with several live bullets in his head and all over his body while topped one of the houses’ roof. All the wounded were taken a Medical Complex in Ramallah, where medical sources announced the death of al-Shahaam upon his arrival at the hospital while the health condition of the other wounded was stable.

PCHR points out that IOF murder crimes against Palestinian civilians have been on the rise, including the use of snipers and direct shooting to kill, harm, and cause severe injuries, ascertaining that these crimes are done without justification So far in 2022, IOF have killed 16 Palestinian civilians, including 4 children, and wounded tens of others, including women and children; all of them are residents of the West Bank, including occupied East Jerusalem.