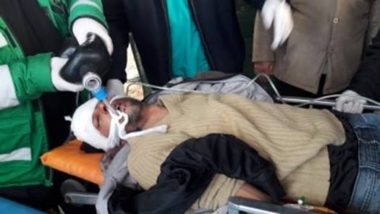 On 49th  Friday of Great March of Return and Breaking Siege, Israeli Forces Wound 83 Civilians, including 23 Children, Woman, 3 Paramedics, and Journalist. Report By The Palestinian Center For Human Right (PCHR).

On Friday evening, 01 March 2019, in excessive use of force against peaceful protesters on the 49th Friday of the March of Return and Breaking the Siege, Israeli forces wounded 83 civilians, including 23 children, a woman, three paramedics, and a journalist, in eastern Gaza Strip. The injury of three of the wounded civilians was reported serious.

According to observations by PCHR’s fieldworkers, the Israeli forces who stationed in prone positions and in military jeeps along the fence with Israel continued to use excessive force against the demonstrators by opening fire and firing tear gas canisters at them.

As a result, dozens of the demonstrators were hit with bullets and teargas canisters without posing any imminent threat or danger to the life of soldiers.

These new violations come one day after The United Nations Independent Commission of Inquiry to investigate the violations committed in the oPt, published their findings and results during the period from 30 March to 31 December 2018. It should be noted that The UN Commission found that there were reasonable grounds to believe that Israeli soldiers violated the international humanitarian law and international human rights law during the demonstrations of the Great March of Return.

Moreover, these violations may amount to war crimes or crimes against humanity, and Israel should investigate them immediately.

At approximately 15:00, thousands of civilians, including women, children and entire families, started swarming to the five encampments established by the Supreme National Authority of Great March of Return and Breaking the Siege adjacent to the border fence with Israel in eastern Gaza Strip cities.

Hundreds, including children and women, approached the border fence with Israel in front of each encampment and gathered tens of meters away from the main border fence, attempting to throw stones at the Israeli forces and firing incendiary balloons along the border fence.

Demonstrators chanted slogans, raised flags and, attempted to approach the border fence, set fire to tires and tried to throw stones at the Israeli forces. Although the demonstrators gathered in areas open to the Israeli snipers stationed on the top of the sand berms and military watchtowers and inside and behind the military jeeps, the Israeli forces fired live and rubber bullets in addition to a barrage of tear gas canisters.

The Israeli shooting, which continued at around 17:30, resulted in the injury of 83 Palestinian civilians, including a child, a woman, a journalist, and  three paramedics.

Two of the wounded paramedics work at the Palestinian Civil Defense and the third one is a volunteer at PRCS, east of Rafah. The injury of 3 of the wounded civilians was reported serious.

In addition, dozens of demonstrators, paramedics and journalists suffered tear gas inhalation and seizures due to tear gas canisters that were fired by the Israeli forces from the military jeeps and riffles in the eastern Gaza Strip. Moreover, a PRCS ambulance was directly hit with a tear gas canister, east of Rafah.

PCHR welcomes again the results of the international investigation into the Great March of Return; and:

1- Calls upon the UN Human Rights Council to adopt and ratify the report when it is discussed on 18 March at the 40th session of the Council.

2- Calls upon the Member States of the Human Rights Council to adopt a decision to renew the mandate of the Commission of Inquiry, in the light of the continuation of Return March and the ongoing violations of human rights and international humanitarian law by the Israeli forces during the period following the Committee’s work period.

3- Calls upon the High Commissioner for Human Rights to submit the report to the International Criminal Court.

4- Reiterates its call for the Prosecutor of the ICC to open an official investigation to these crimes, and to pursue and hold accountable those involved in the issuance of decisions in the Israeli army at the political and security level and who carried out these decisions.