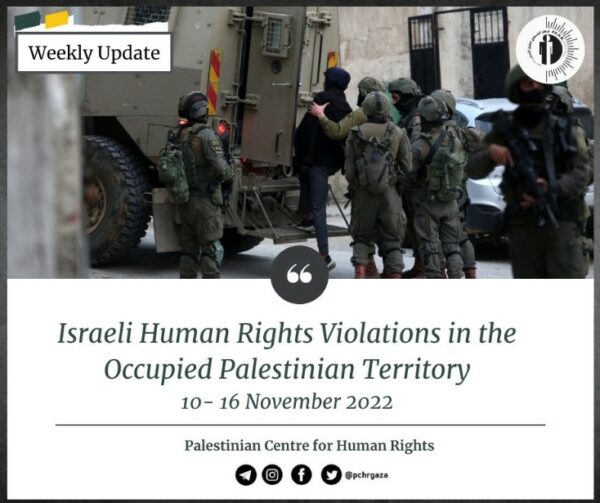 A Palestinian girl was killed and six Palestinians, including a child and an international solidarity activist, were wounded, while dozens of others suffocated in Israeli Occupation Forces (IOF) attacks in the West Bank, including occupied East Jerusalem. Details are as follows:

On 14 November 2022, IOF killed Fulla Rasmi ‘Abdul al-‘Aziz Masalmah (16) and wounded Anas Suliman Hassounah (26) with a live bullet in his left shoulder and then arrested him.

This incident occurred after IOF opened fire at a Hyundai cat with a yellow registration plate driven by Hassounah with the girl sitting next to him in the Schools neighborhood in central Beitunia village, west of Ramallah, where IOF patrolled the area.

IOF claimed that the car mentioned above tried to run over Israeli soldiers and the driver did not obey the soldiers’ orders to stop, so they opened fire at the car, wounding the girl in her back with a live bullet that settled in her chest. There was no eyewitness in the area at the time of the incident, as it took place at dawn, but footages published on social medica showed IOF opening fire at the vehicle from behind.

Meanwhile, those injured were victims of excessive use of force that accompanied IOF incursions into cities and villages, or suppression of peaceful protests organized by Palestinian civilians, and they were as follows:

On 11 November 2022, three Palestinians and an international solidarity activist were shot with rubber-coated metal bullets during IOF’s suppression of Kafr Qaddoum weekly protest in northern Qalqilya.

On the same day, dozens of Palestinians suffocated due to teargas inhalation and sustained wounds by stun grenade shrapnel during clashes with IOF near Bab al-Zawiyia area in Hebron.

On 14 November 2022, three Palestinians, including 2 children, sustained fractures and bruises when IOF attacked Palestinians, who were harvesting olive trees in their agricultural land in Dura in Hebron. Also, IOF fired teargas canisters and stun grenades at the Palestinians after the latter uprooted olive seedlings planted by a settler in their land.

On14 November 2022, a 14-year-old child was shot with a bullet in his right leg during clashes with IOF, who established a temporary military checkpoint at the northern entrance to Teqoa village, east of Bethlehem.

IOF demolished two agricultural houses, forced a Palestinian to self-demolish his house, and confiscated agricultural equipment and a generator in the West Bank, including occupied East Jerusalem. Details are as follows:

On 11 November 2022, IOF forced a Palestinian to self-demolish his 70-sqm house sheltering a family of 4 persons, including a woman and 2 children, in Beit Safafa village in occupied East Jerusalem, under the pretext of unlicensed construction.

On 13 November 2022, IOF demolished two agricultural dwellings built of tin plates and steel and solar panels, displacing two families of 9 persons, including 2 women and 5 children, under the pretext of unlicensed construction.

On the same day, Israeli Administration and Organization officers, under IOF’s protection, confiscated tin plates, steel pillars and a generator belonging to a Palestinian, who intended to build a tinplated barrack for his livestock in Yatta city in Hebron.

”Since the beginning of 2022, Israeli occupation forces made 131 families homeless, a total of 767 persons, including 151 women and 343 children. This was the outcome of IOF demolition of 147 houses and many residential and agricultural tents. IOF also demolished 93 other civilian economic objects, leveled vacant areas of land, and delivered dozens of notices of demolition, cease-construction, and evacuation.

Israeli settlers conducted 4 attacks on Palestinians’ vehicles in different areas in the West Bank. Details are as follows:

On 14 November 2022, Israeli settlers moved into Haris village in Salfit, north of the West Bank, and burned four vehicles belonging to the villagers.

On 15 November 2022, Israeli settlers attacked and set fire to a vehicle belonging to a Palestinian who was in his way back from ‘Attil village in northern Tulkarm to Nablus.

On the same day, Israeli settlers intercepted a bus for a women’s trip in Hebron and prevented it from moving for few hours, enticing fear among the passengers.

On 16 November 2022, Israeli settlers threw stones at four vehicles near Ramin village, east of Tulkarm, breaking their windows. On the same day, Israeli settlers damaged a vehicle belonging to a Palestinian doctor near Jit village in Qalqilya.

”Since the beginning of the year, settlers conducted at least 236 attacks. In two of the attacks, 2 Palestinians were killed.

IOF carried out 35 incursions into the West Bank, including occupied East Jerusalem. Those incursions included raids and searches of civilian houses and facilities and establishment of checkpoints. During those incursions, 62 Palestinians were arrested.

Meanwhile, IOF maintain its illegal and inhuman 15-year closure on the Gaza Strip. Details available in PCHR’s monthly-update in the Gaza crossings.

So far in 2022, IOF established at least 4000 temporary military checkpoints and arrested 183 Palestinians at those checkpoints