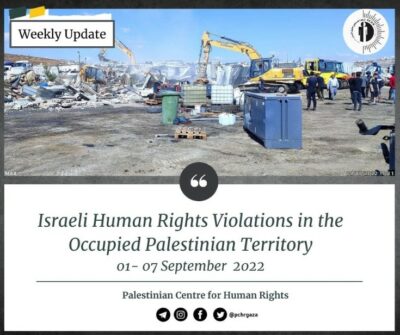 Five Palestinians were killed, and 31 others were injured, including 9 children, a woman and a paramedic, while dozens of others suffocated in Israeli Occupation Forces (IOF) attacks in the West Bank, including occupied East Jerusalem.  Also, a Palestinian detainee died due to medical neglect policy.  Details are as follows:

On 01 September 2022, IOF shot dead Yazan Na’iem ‘Afanah (24) after being wounded in his chest during their incursion into Ramallah in the West Bank. (Details available in this press release).

On 02 September 2022, Fadi Mohammed Ghattas (24), from Dheisheh refugee camp in Bethlehem, was killed after IOF fired 6 live bullets at him and left him to bleed for 40 minutes at the entrance to Beit ‘Einun Road in northern Hebron.  IOF took the dead body and kept it in custody, claiming that he stabbed and wounded an Israeli soldier. Later, IOF summoned Ghattas’s father for interrogation and to identify the corpse.

On 05 September 2022, IOF killed Taher Zakarna (19) after they fired a live bullet at his head during the suppression of protestors after IOF moved into Qabatia village, southeast of Jenin in the West Bank. Before their withdrawal, IOF arrested two Palestinians. (Details available in this press release).

On 06 September 2022, Mohammed Saba’nah was killed, and 17 other Palestinians were injured, including 6 children, a woman and a paramedic, by IOF fire during the latter’s incursion into Jenin, northern West Bank, and demolition of the house of a Palestinian who was killed after carrying out a shooting attack in Israel in April. The house demolition falls under IOF’s collective punishment policy against the families of Palestinians who are allegedly accused of carrying out attacks against Israeli targets. (Details available in this press release).

On 07 September 2022, Yunis Ghassan Tayeh (21) was killed by IOF fire during the latter’s incursion into al-Far’a refugee camp, south of Tubas in the West Bank. Before their withdrawal, IOF arrested Yunis’s uncle. (Details available here)

Meanwhile, those injured were victims of excessive use of force that accompanied IOF incursions into cities and villages and suppression of peaceful protests organized by Palestinian civilians, and they were as follows:

On 02 September 2022, 7 Palestinians, including 2 children, were shot with rubber-coated bullets during clashes that followed IOF’s suppression of Kafr Qaddoum weekly protest in northern Qalqilya.

On the same day, several Palestinians sustained wounds after being beaten, and others suffocated due to teargas inhalation, while 4 Palestinians, including a child, were arrested during IOF’s suppression of a peaceful protest organized in solidarity with Nabi Samuel villagers near al-Jeeb military checkpoint in occupied East Jerusalem.

On 06 September 2022, a child was hit with a stun grenade in his head during clashes with IOF at the western entrance to al-‘Arroub refugee camp in Hebron. On the same day, 5 Palestinians sustained wounds after IOF opened fire and fired teargas canisters during their incursion into Jalazone refugee camp, north of al-Bireh city. Before their withdrawal, IOF arrested 4 Palestinians, including 2 siblings.

On 07 September 2022, a Palestinian was shot with a live bullet after IOF opened fire at him, noting he was riding his motorcycle by Salem Palin in Nablus. IOF then arrested him.

IOF demolished 3 houses, rendering 4 families of 18 persons, including 6 women and 7 children, homeless. Also, IOF demolished 9 civilian economic facilities and razed a plot of land and property in the West Bank, including occupied East Jerusalem. Details are as follows:

On 02 September 2022, upon an Israeli municipal demolition decision allegedly for unlicensed construction, a Palestinian self-demolished his house in Ras al-‘Amoud neighborhood in occupied East Jerusalem, rendering his family and his two brothers’ families of 11 persons, including 4 women and 3 children, homeless.

On the same day, upon a similar decision, a Palestinian self-demolished part of his 80-sqaure-meter house in occupied East Jerusalem. The house sheltered a family of 7 persons, including 2 women and 4 children.

On 03 September 2022, IOF’s bulldozers razed 8 dunums in Sinjil village, east of Ramallah. The levelled land is located in an area of 5200 dunums that IOF attempt to seize them, as these dunums are surrounded by 3 Israeli settlements and a military camp.

On 03 September 2022, IOF razed 8 dunums in Sinjil village, eastern Ramallah.  This plot of land is part of 5200 dunums, which IOF try to seize, and is surrounded by 3 settlements and an Israeli camp.

On 06 September 2022, IOF demolished 2 agricultural facilities, sealed off a water well and seized two containers full of construction equipment in Al-Khader village, southwest of Bethlehem, under the pretext of unlicensed construction. Also, IOF demolished for the second time a 95-meter retaining wall surrounding a plot of land in Jabal Mukaber in occupied East Jerusalem.

On 07 September 2022, IOF demolished a house and 7 civilian economic facilities, including 3 livestock barns, a carwash, tires shop, and 2 stores, in the rented Islamic Endowment property (Waqf) at ‘Anata entrance in East Jerusalem, under the pretext of unlicensed construction.

”Since the beginning of 2022, Israeli occupation forces made 112 families homeless, a total of 666 persons, including 129 women and 307 children. This was the outcome of IOF demolition of 116 houses and 41 residential tents. IOF also demolished 89 other civilian economic objects, leveled vacant areas of land and delivered dozens of notices of demolition, cease-construction, and evacuation.

On 02 September 2022, under IOF’s heavy protection, hundreds of Israeli settlers accompanied by the Extremist Israeli Member of Knesset (MK), Itamar Ben Gvir, moved into Nabi Samuel village in occupied East Jerusalem. They roamed its streets raising Israeli flags and attempted to provoke Palestinians. The settlers then gathered at the village’s entrance opposite to a protest organized by the village’s residents.

On 06 September 2022, Israeli settlers, under IOF’s protection, attacked Palestinian houses in Khelet al-Nahlah and Khalayil al-Louz areas opposite to “Efrat” settlement, south of Bethlehem. They attempted to raid the houses by force, beat their residents and threw stones at them. As a result, many residents sustained bruises. Also, IOF attacked the residents, who tried to confront the settlers, and arrested 6 of them.

”Since the beginning of the year, settlers conducted at least 178 attacks. In two of the attacks, 2 Palestinians were killed.

IOF carried out 190 incursions into the West Bank, including occupied East Jerusalem. Those incursions included raids and searches of civilian houses and facilities and establishment of checkpoints.

During those incursions, 96 Palestinians were arrested, including 3 children and a female journalist.  In the Gaza Strip, on 07 September 2022, IOF conducted two limited incursions into eastern al-Bureij camp in central Gaza Strip and into eastern Khuza’a in Khan Yunis.

IOF maintains an illegal and inhuman 15-year closure on the Gaza Strip. Details available in PCHR’s monthly- update on the state of Gaza crossings in July.

On 04 September 2022, IOF closed the metal detector gate established at the main entrance to Nabi Saleh village in Ramallah, and reopened it on 07 September 2022, as part of the collective punishment policy for an alleged shooting at the military watchtower established there.

”So far in 2022, IOF established at least 3,005 temporary military checkpoints and arrested 142 Palestinians at those checkpoints