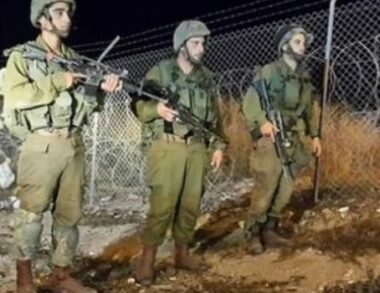 On Thursday night, Israeli soldiers abducted two Palestinians on their lands near Khan Younis, in the southern part of the besieged Gaza Strip.

Media sources said the soldiers, stationed across the perimeter fence, abducted the two men and took them to an unknown destination.

They added that the Palestinians were on their lands near the perimeter fence southeast of Khan Younis when the soldiers ordered them to approach them and abducted them.

Earlier Thursday, the soldiers invaded Palestinian agricultural lands in the central and southern Gaza Strip and bulldozed them.