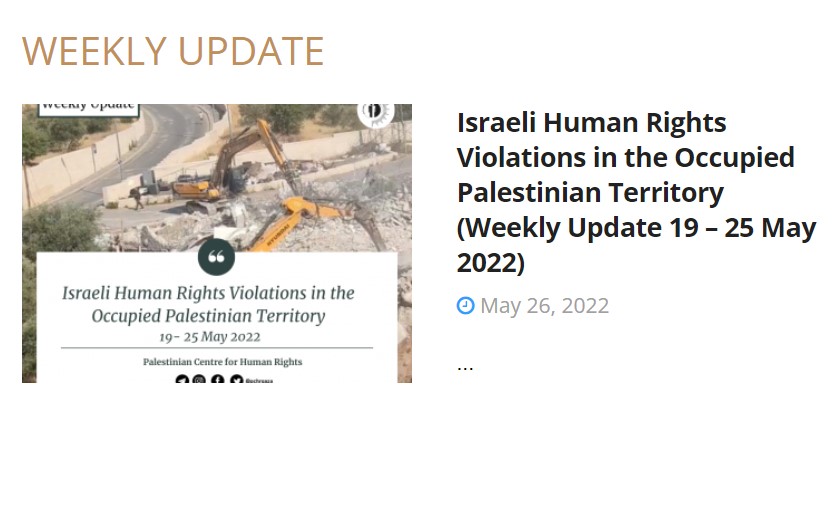 Nineteen Palestinian civilians, including 6 children, were injured by Israeli Occupation Forces (IOF)’s fire while dozens of others suffocated and sustained bruises in IOF attacks in the West Bank, including occupied East Jerusalem, except two fishermen in the Gaza Strip.  Those injured were victims of excessive use of force that accompanied IOF suppression of peaceful protests and gatherings organized by Palestinian civilians and they were as follows:

On 20 May 2022, 4 civilians, including a child, sustained rubber bullet wounds during IOF’s suppression of Kafr Qaddoum weekly protest in Qalqilya.

On the same day, 4 Palestinians were wounded with live bullets and directly hit with teargas canisters during IOF’s incursion into al-Mazra’a al-Gharbiyia village, northwest of Ramallah. Also, a Palestinian woman sustained bruises and wounds after an Israeli military SUV rammed her car in the same village.

On 21 May 2022, two children were injured with 2 live bullets in clashes during IOF’s incursion into central Hebron.  Also, dozens of Palestinians suffocated after IOF’s suppression of a peaceful protest with sound bombs and teargas canisters.

The protest was organized by dozens of villagers, international solidarity and peace activists in eastern Yatta in Hebron against an Israeli plan to expel thousands of Palestinians from the Masafer Yatta area.

On 23 May 2022, a child was shot with a live bullet in his thigh before arresting him during clashes with IOF near a military checkpoint established at the entrance to Ras Karkar village, west of Ramallah.

On 24 May 2022, 3 Palestinians, including a child, sustained live bullet wounds during clashes with IOF, who surrounded a house in Jenin.

On the same day, three Palestinians sustained wounds after being targeted with live and rubber bullets and direct teargas canisters during clashes that accompanied IOF’s demolition of a mosque behind the annexation wall in central al-Ramadin village, south of Qalqilya.

On the same day, IOF chased a Palestinian fishing boat with two fishermen on board off Rafah shore and fired rubber bullets at them.  As a result, the two fishermen were wounded and then arrested, but were released the next day. More information is available here.

”So far in 2022, IOF attacks killed 50 Palestinians, including 39 civilians: 11 children, 4 women (one was a journalist) and the rest were activists; 3 of them were assassinated. Also, 705 others were wounded in these attacks, including 74 children, 4 women, and 19 journalists all in the West Bank, except for 9 fishermen in the Gaza Strip.

Israeli authorities demolished 4 houses and 2 residential tents, rendering 4 families of 25 persons, including 5 women and 11 children, homeless. Also, Israeli authorities demolished a mosque and confiscated 2 facilities after dismantling them. Moreover, they handed 16 demolition and cease-construction notices in the West Bank, including occupied East Jerusalem. Details are as follows:

On 19 May 2022, IOF demolished two residential tents in Kherbet al-Markaz in Hebron, rendering 2 families of 12 persons, including 3 children, homeless. On the same day, IOF forced a Palestinian to self-demolish his house in Sur Baher village in occupied East Jerusalem, under the pretext of unlicensed construction.

Also, the Israeli authorities handed 6 cease-construction notices to houses in Artas village, south of Bethlehem, under the pretext of unlicensed construction.

On 21 May 2022, IOF handed 7 cease-construction notices to under-construction and inhabited houses and to a café in Kafr ad-Dik village in western Salfit.

On 23 May 2022, IOF demolished two under-construction houses and 6 cement walls in ‘Ein ad-Duyuk at-Tahta village, northwest of Jericho. On the same day, IOF handed 3 cease-construction notices to two rooms and a house in eastern Yatta in Hebron.

Also, IOF demolished an under-construction mosque comprised of 2 floors built on an area of 400 square meters behind the annexation wall in central Ramadin village, south of Qalqilya. The demolition was conducted a week after the mosque was notified under the pretext of unlicensed construction.

On 25 May 2022, IOF demolished a 2-storey house in Beit Safafa village in occupied East Jerusalem, under the pretext of unlicensed construction, rendering two families of 13 persons, including 3 women and 8 children, homeless.

”Since the beginning of 2022, IOF rendered 65 families homeless, a total of 368 persons, including 75 women and 180 children. This was the outcome of IOF demolition of 71houses and 7 residential tents. IOF also demolished 45 other civilian objects, leveled 243 dunums and delivered 83 notices of demolition, cease-construction, and evacuation.

In setters’ attacks, Six Palestinians were injured during setters’ attacks in the West Bank; one of them was shot with a live bullet. Also, a vehicle was set on fire, 140 trees were cut, and a Palestinian was kidnapped.  Details are as follows:

On 21 May 2022, a group of Israeli settlers attacked a residential building in Sheikh Jarrah neighborhood in occupied East Jerusalem and assaulted its residents. During which, a Palestinian was wounded with a live bullet in his waist fired by an Israeli settler. After that, IOF arrived at the area and physically assaulted Palestinians gathered in the area and heavily fired teargas canisters and sound bombs at them to disperse them.

On 22 May 2022, a child was critically injured in his head and a vehicle was set on fire by Israeli settlers, from “Ish Kodesh” settlement outpost, in Qusra village, southeast of Nablus. In the evening, Israeli settlers kidnapped a Palestinian and severely beat him before handing him to IOF, who handcuffed him and did not provide him first aid. Around an hour later, he was released.

On 23 May 2022, Israeli settlers pepper-sprayed at a Palestinian and his wife and their infant in their vehicle near al-Mas’oudiyia checkpoint, northwest of Nablus. As a result, the infant severely suffocated.

On 24 May 2022, Israeli settlers cut 140 olive and almond trees and damaged water tanks, southeast of Qaryut village in Nablus. In the evening, Israeli settlers threw stones at a house and broke its windows. Also, setters attacked Palestinians, their vehicles and their houses in Al-Lubban ash-Sharqiya, Burqa and Huwara villages.

On 25 May 2022, Israeli settlers carried out attacks and riots in Urif village in Nablus and broke the village mosque’s windows. Also, settlers conducted riots and removed Palestinian flags from electricity poles in central Huwara village.

”So far this year, settlers carried out 133 attacks on Palestinians and their properties in the West Bank.

IOF carried out 199 incursions into the West Bank, including occupied East Jerusalem. Those incursions included raids and searches of civilian houses and facilities and the establishment of checkpoints. During those incursions, 82 Palestinians, including 12 children, were arrested.

Also on 23 and 24 May 2022, IOF conducted two limited incursions into eastern Khan Yunis and in central Gaza Strip.

On 19 May 2022, IOF completely closed the Sheikh Jarrah neighborhood and established police checkpoints at the neighborhood’s intersections and entrances and on nearby streets to secure settlers’ raids into the neighborhood to visit Tomb of Simeon Coinciding with the Jewish holiday “Lag BaOmer“.

In the West Bank, including occupied East Jerusalem, IOF continues to impose restrictions on the freedom of movement. On top of its 108 permanent checkpoints, IOF established 85 temporary military checkpoints and arrested a Palestinian at those checkpoints.

”So far in 2022, IOF established 1601 temporary military checkpoints and arrested 98 Palestinians at those checkpoints