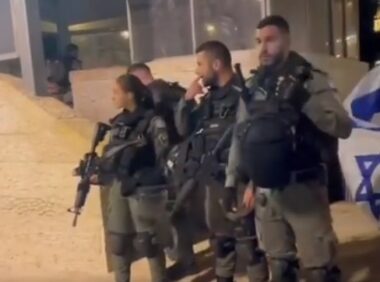 The soldiers installed a military roadblock at the main entrance of Sur Baher town, southeast of Jerusalem, before stopping and searching dozens of cars, in addition to interrogating many Palestinians while inspecting their ID cards.

The soldiers then abducted a young man, Mohammad Attoun, and took him to an unknown destination.

Furthermore, many army jeeps invaded the Ras al-Amoud area in Silwan town in Jerusalem, leading to protests, and abducted a young man.

Earlier Thursday, the soldiers abducted five young Palestinian men from their homes in the Old City of occupied Jerusalem.

On Thursday dawn, the soldiers abducted at least twenty-two Palestinians, including fathers and their children, from their homes in several parts of the occupied West Bank.