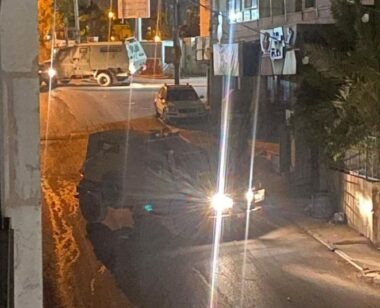 Israeli soldiers abducted, Thursday dawn, at least twenty-two Palestinians, including fathers and their children, from their homes in several parts of the occupied West Bank.

The soldiers invaded many communities across the occupied West Bank, stormed, and violently searched dozens of homes, causing damage.

The army also invaded Azzoun town, east of Qalqilia, leading to protests before a few young men hurled pipe bombs at the military vehicles while the soldiers fired many live rounds.

Many Palestinians protested the Huwwara invasion, before the soldiers fired live rounds, wounding a young man in the leg.

In Ramallah, in the central West Bank, the soldiers abducted Raed Shawamra, from his home in the Ein Monjid area, and former political prisoner, Yousef Raed Hamed, 20, from his home in Silwad town, east of the city. The soldiers also invaded many neighborhoods in the al-Jalazonerefugee camp, north of Ramallah.

In Hebron, in the southern part of the West Bank, the soldiers abducted Bassel Abdul-Mon’em Jaradat, his son Bassel, 15, Jihad Omar Jaradat and his son Omar, 14, Bashar Edrees Jaradat, Sa’ad Nimir Froukh, Shehada Mtoor, and his son Morad, from their homes in Sa’ir town, northeast of the city.

On Wednesday evening, the soldiers abducted six Palestinians from Hebron, Jenin, and Jerusalem. One of the abducted Palestinians in Hebron was taken prisoner after illegal colonizers assaulted him and several other shepherds.

On Wednesday afternoon, the army shot a young man and caused dozens of Palestinians, including a family of nine, to suffer the effects of tear gas inhalation in Huwwara town, south of Nablus.