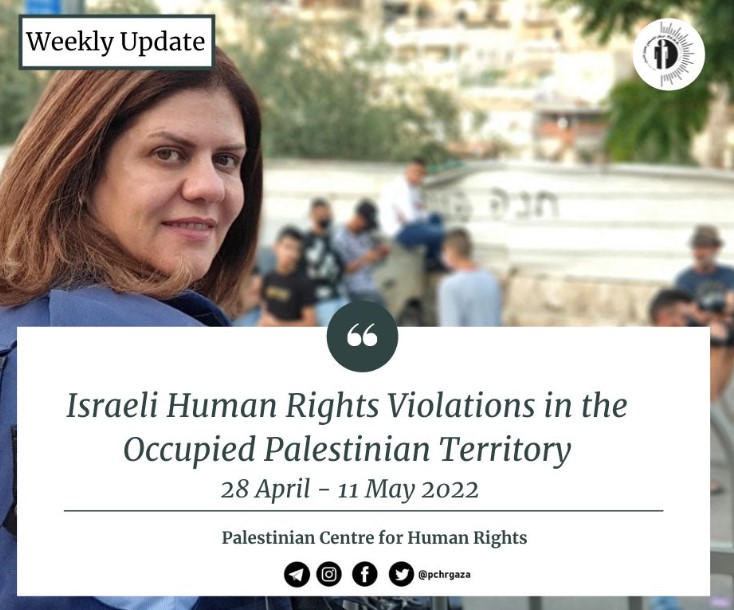 The Palestinian Center For Human Rights (PCHR) – (This weekly report covers two weeks due to holidays):

On 30 April 2022, a Palestinian civilian was killed after being shot with a live bullet in his chest while walking on the street during the Israeli occupation forces (IOF) incursion into Azzun village in Qalqilya.

Om 08 May 2022, IOF killed a Palestinian civilian, from the Gaza Strip and resided in the West Bank, while trying to sneak into Israel through a hole in the annexation wall in southern Tulkarm. More information is available here.

On the same day, a child, from Bethlehem, was killed after being shot with 4 live bullets by an Israeli security officer, under the pretext that he sneaked into “Tekoa” settlement that is established on Bethlehem lands. IOF claimed that he had a knife in his possession. There were no eyewitnesses to the incident.

On 11 May 2022, journalist Shireen Abu ‘Akleh, Al-Jazeera media network’s reporter, was killed and her colleague was injured by the IOF fire during their coverage of IOF’s incursion into the Jenin refugee camp. More information is available here. On the same day, IOF killed a Palestinian boy during clashes in al-Bireh city in Ramallah, after chasing Palestinian protestors in the area. More information is available here.

Meanwhile, those wounded were victims of excessive use of force that accompanied the suppression of peaceful protests and gatherings organized by Palestinian civilians and they were as follows:

On 30 April 2022, two Palestinians were injured with live bullets during clashes that accompanied IOF’s incursion into Zababdeh village, southeast of Jenin.

On 01 May 2022, a Palestinian sustained live bullet wounds in his foot while others suffocated after clashed with IOF at the entrance to Beit Ummar village, north of Hebron.

On 02 May 2022, 3 Palestinians were wounded with rubber bullets and other suffocated during clashes that accompanied IOF’s incursion into Ni’lin village, west of Ramallah.

This coincided with IOF’s securing the raids of  hundreds of Israeli settlers to the mosque’s yards. Also, IOF surrounded Palestinian worshipers inside al-Qibli chapel and al-Marwani Mosque, closed the doors of the mosques and fired sound bombs and rubber bullets inside them. As a result, the glass of Salah Al-Din Minbar (pulpit) in al-Qibili chapel was broken.

In addition, IOF severely assaulted Palestinian women, who tried to present during settlers’ raids to the mosque, obstructed press crews’ work and forced them to evacuate the mosque’s yards.

On 06 May 2022, 4 Palestinians were shot with rubber bullets in their limbs during IOF’s suppression of Kafr Qaddoum weekly protest in Qalqilya.

On 07 May 2022, a Palestinian sustained live bullet wounds in his shoulder after IOF opened fire at a group of Palestinian workers who tried to enter Israel via a hole in the annexation wall in southern Qalqilya. On the same day, 3 Palestinians were inured with rubber bullets fired by IOF to disperse a Palestinian group gathered to confront settlers, who moved into Haris village in northern Salfit and attacked Palestinians’ houses.  Also, a Palestinian woman sustained wounds while trying to prevent IOF from assaulting her husband.

On 08 May 2022, a journalist and human rights defender sustained bruises after being assaulted and dragged on the ground by IOF while covering and filming IOF demolition of a tin-plate room in eastern Yatta, south of Hebron.

On the same day, a Palestinian was shot with IOF’s fire while passing through a military checkpoint in Bab al-‘Amoud area in occupied East Jerusalem, under the pretext that he stabbed a police officer. IOF prevented to provide first aid to him for more than half an hour before he was transported to Hadassah Hospital in a critical condition.

On 09 May 2022,  three Palestinians, including 2 children, were shot with live bullets during clashes that accompanied IOF’s incursion into Nablus to secure Israeli settlers raids to Joseph’s tomb from the eastern side. On the same day, 4 Palestinians were injured by IOF’s fire while trying to confront settlers attacks in Azzun village in Qalqilya.

On 10 May 2022, a female journalist sustained teargas canister shrapnel wounds in her foot and 6 other Palestinians were assaulted during IOF demolition of al-Rajbi family house in occupied East Jerusalem.

On 11 May 2022, a Palestinian was critically injured by IOF’s fire at al-Qatateen gate, one of al-Aqsa Mosque’s gates, before he was arrested, under the pretext that he tried to carry out a stabbing attack. Following the incident, IOF closed al-Aqsa Mosque’s gates, physically assaulted Palestinian worshipers, prevented them from present in the mosque’s yards, and arrested one of them.

During the reporting period, 21 settler-attacks were reported in the West Bank: 7 Palestinians, including 2 journalists, sustained bruises; 397 trees were cut and damaged and several vehicles sustained material damage. Details are as follows:

On 03 May 2022, a Palestinian sustained wounds during settlers’ attacks on Kafr Malik village in Ramallah. Also, settlers ran over 3 sheep in the area.

On the same day, Israeli settlers damaged 300 olive trees and legume crops planted in 15 dunums after grazing their sheep in these dunums in western Al-Khader village in Bethlehem.

As a result, a glass of a vehicle was broken and his owner was injured. In addition, Israeli settlers damaged  a Palestinian vehicle and broke its windows, 500 meters away from Al-Mughayyir village’s intersection, north of Ramallah. Also, they attacked and damaged a Palestinian bus at the entrance to Beit Furik village, and attacked another vehicle near Huwara military checkpoint, southeast of Nablus.

On 06 May 2022, Israeli settlers, from ” Yitzhar” settlement, attacked 3 houses in Urif village, southeast of Nablus, and set 3 vehicles parked in the area on fire.

On 07 May 2022, Israeli settlers threw stones at Palestinian houses at the main intersection leading to Haris village, north of Salfit. On the same day, settlers cut 30 olive trees from Kafr ad-Dik land, west of Salfit.

On 08 May 2022, Israeli settlers threw stones at a bus carrying 15 players, including 4 children, from ‘Azmout club at Beit Furik military checkpoint, northeast of Nablus, causing material damage to it.

On 09 May 2022, Israeli settlers, from “ Ma’on ” settlement, uprooted 20 olive trees in eastern Yatta in Hebron. On the same day, 3 Palestinians, including 2 journalists, were injured during settlers’ attacks in Azzun village in  Qalqilya.

On 10 May 2022, Israeli settlers uprooted 17 olive seedlings and damaged an agricultural room on Kafr ad-Dik village’s lands, west of Salfit.

So far this year, settlers carried out 120 attacks on Palestinians and their properties in the West Bank.

Israeli authorities demolished 14 houses and dwellings, making 19 families homeless, a total of  90 persons, including 21 women and 51 children. Also, they demolished 10 commercial facilities , built a road for settlers, razed 22 dunums, and authorized the expulsion of 2000 people from Masafer Yatta in Hebron. Details are as follows:

On 05 May 2022, the Israeli Supreme Court authorized forcible expulsion of hundreds of Palestinians from their lands in Masafer Yatta in Hebron. Next day, the Israeli civil administration announced that the sub-committee of the of Judea and Samaria Higher Planning Council is set to give its approval for planning and  building 3,988 new settlement units in the West Bank. More information available here.

On 10 May 2022, Israeli vehicles demolished a 3-storey building (600 sqm) in Silwan village, under the pretext of non-licensing. The first floor included shops while the second and third floors included 5 residential apartments housing 5 families, including 30 members: 6 women and 19 children.

On 11 May 2022, Israeli authorities demolished 4 houses; 3 were self-demolished in Silwan, Beit Hanina and Isawiya villages in occupied East Jerusalem. IOF made 5 families homeless, a total of  21 persons, including 6 women and 10 children.

On the same day, Israeli authorities demolished 2 facilities; one of them was a real estate office in Jabal Al Mukaber neighborhood while the other was an iron storage in Isawiya village in occupied East Jerusalem.

On the same day, Israeli authorities demolished a house in Al-Walaja village, west of Bethlehem. Also, they demolished 9 dwellings and rooms and 8 barracks and livestock tents in Kherbet al-Rakiz and Kherbet al-Fakhit in Hebrob. IOF made 9 families homeless, a total of 39 persons, including 22 children. In addition, IOF served 14 demolition notices to dwellings and barns in southern Hebron.

Since the beginning of 2022, Israeli occupation forces made 60 families homeless, a total of 339 persons, including 69 women and 166 children. This was the outcome of IOF demolition of 65 houses and 5 residential tents. IOF also demolished 39 other civilian objects, leveled 244 dunums and delivered 63 notices of demolition, cease-construction, and evacuation.

IOF carried out 306 incursions into the West Bank, including occupied East Jerusalem. Those incursions included raids and searches of civilian houses and facilities and establishment of checkpoints. During those incursions, 139 Palestinians, including 13 children, were arrested. Also, IOF arrested a child after he tried to sneak into Israel via the border fence in eastern Khan Yunis, and released him later.

On 07 May 2022, under its collective punishment policy against Palestinians accused of conducting attacks against  IOF or settlers, IOF demolished the family house of a Palestinian prisoner from Jenin. More information available here.

On 08 May 2022, under its collective punishment policy, IOF took the measurements of 2 houses as a prelude to demolish them after their incursion into Rummanah village  in western Jenin. The two houses belong to the families of 2 Palestinians arrested by IOF on the same day, after being accused of carrying out an attack that resulted in the murder of 3 Israelis in Elad city in Israel.

So far in 2022, IOF demolished 5 houses and closed another one after damaging its contents, as part of collective punishment policy.

The Israeli occupation authorities declared closure of crossings with the Gaza Strip and West Bank starting from 03 to 06 May 2022, On the occasion of the anniversary of the founding of the State of Israel. On 05 May 2022, Israeli authorities announced the decision of Defense Minister, Benny Gantz, to extend the imposed closure until 08 May 2022.

On 08 May 2022, Israeli authorities announced the reopening of the West Bank crossings to permit holders, except for residents of Rummanah village in Jenin, as the two Palestinians accused of carrying out an attack in Elad city in Israel, live in this village. In addition, Israeli authorities announced that the Beit Hanoun (Erez) crossing remains closed for the Gaza Strip residents until further notice, except for patients and humanitarian cases that can be entered and traveled after receiving permission from the concerned authorities.

In the West Bank, including occupied East Jerusalem, IOF continues to impose restrictions on the freedom of movement. On top of its 108 permanent checkpoints, IOF established 142 temporary military checkpoints and arrested 11 Palestinians at those checkpoints.

So far in 2022, IOF established 1406 temporary military checkpoints and arrested 89 Palestinians at those checkpoints