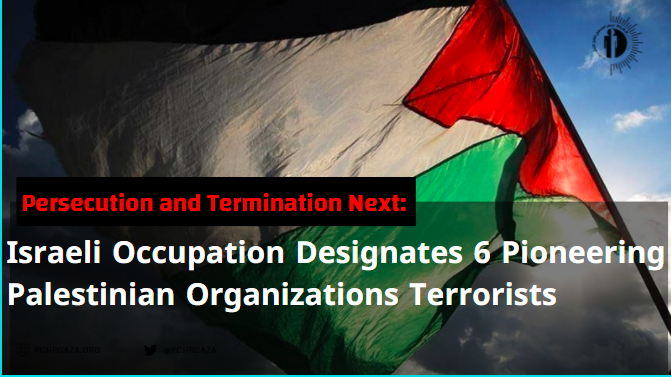 October 23, 2021 (The Palestinian Centre for Human Rights) – Israeli Defense Minister, Benny Gantz, designated six pioneering Palestinian civil society organizations as terrorist organizations, allegedly for affiliations with the Popular Front for the Liberation of Palestine (PFLP), aiming to free Palestine and abolish the State of Israel. These organizations are well known, each pioneering in their field with significant achievements over the course of their decades long work in the occupied Palestinian territory.

The Palestinian Centre for Human Rights (PCHR) condemns in the strongest terms the Israeli decision and asserts that it is an obvious ploy to silence and end these leading organizations, who expose the occupation’s crimes, aim to prosecute them before international justice, and support Palestinian people’s resilience. PCHR warns that the Israeli decision is an attempt to provide legal coverage to persecuting these organizations, targeting their personnel, and liquidating them. PCHR holds the occupation fully responsible for the safety of these organizations’ staff.

The Israeli decision aims to undermine our work before the International Criminal Court at a very sensitive time, as serious investigations are underway into Israeli crimes. Israel is attempting to practice a Trump-era style of bullying, who issued an Administrative Order to prosecute any party that collaborates with the ICC in its investigations against the United States or Israel. This decision aims to uproot these organizations completely by drying their sources of funding by claiming linkage to terrorism. Unfortunately, we expect dangerous measures like confiscation of bank accounts, closures, travel ban. We also warn against the possibility of physical harm and liquidation.”

The Israeli decision is a futile attempt to reverse the facts. As the occupation throws accusation of terrorism without proof, Palestinian human rights organizations have managed over many years to collect evidence that prove the occupation’s systematic terrorism against the Palestinian people, through documentation of war crimes and crimes against humanity, which we have presented to the ICC. The integrity of the evidence we supplied, forced the ICC to open an investigation into Israeli crimes. We are now closer than ever to having Israeli occupation leaders summonsed for investigation.”

We believe in the work we do. We will not stop and shall continue to hold Israel accountable at all levels. We will defend our cause and our organizations. We will protect the rule of international law and human rights. At last, I want to emphasize that the international community ought to take assume its legal and moral responsibility to end the Israeli bullying. If the rule of law is defeated, what is the alternative?!”

According to the Israeli decision the Union of Palestinian Women’s Committees, Addameer Prisoner Support and Human Rights Association, Al-Haq, Bisan Center for Research and Development, Defense for Children International – Palestine, and the Union of Agricultural Work Committees are all terrorist organizations, affiliated with the leadership of the PFLP which aims to destroy Israel and free Palestine. The decision also claimed that these organization are run and operated by PFLP leaders and activists.

According to Israeli allegations, the designation was the result of a collaboration between the Israeli Shin Bet and the National Bureau for Counter Terror Financing of Israel that started early this year.

It is noteworthy that PCHR repeatedly and continuously documents Israeli practices against the civil society in the oPt, which has transpired as an obvious policy of all Israeli governments. These practices include death threats against human rights activists, restrictions on their freedom of movement, raiding and closing CSO offices, arresting human rights defenders, and defaming, smearing, and delegitimizing CSOs; as well as, denying them external funding. The Ministry of Strategic Affairs and Public Diplomacy leads the efforts to undermine Palestinian civil society, with collaboration with different tools, particularly right-wing organizations that operate under the cover of NGOs, most prominently is NGO Monitor.

PCHR asserts that there is a systematic Israeli policy to chain CSOs, particularly human rights and development organizations, to silence them and undermine their efforts in persecuting Israeli war criminals before international justice. It also aims to abort any effort to support the resilience of the Palestinian people living under occupation. PCHR holds the international community responsible for holding Israel accountable under international human rights law and international humanitarian law.

Hence, PCHR demands the international community, particularly European Union member States and the High Contracting Parties to the Geneva Conventions, to pressure Israel to cease its attacks on the Palestinian civil society and to force it to respect IHL and international human rights law in the oPt.