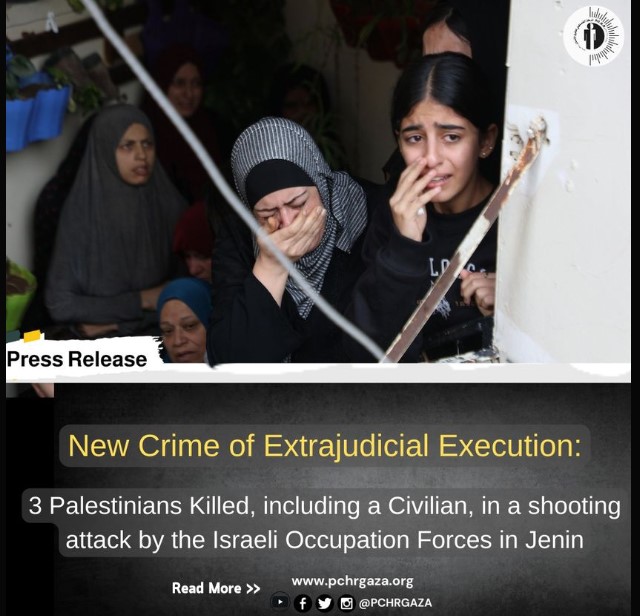 The Palestinian Center For Human Rights (PCHR): IOF killed 3 Palestinians, including a civilian, while he was trying to pull out the two dead bodies who were members of the Palestinian resistance and killed in direct gunfire as part of extrajudicial executions. They were ambushed by IOF in the eastern neighborhood of Jenin, deep in PA-controlled areas.

According to PCHR’s investigations and eyewitnesses’ testimonies, at approximately 04:00, on Thursday, 08 December 2022, an Israeli special force from the “Yamam Unit” sneaked into the center of the Eastern Neighborhood in the old city of Jenin, set an ambush nearby Al-Razi Hospital and roofed its snipers of several buildings in the area.

The latter opened fire on two Kia vehicles (brown and silver) and killed their drivers on the main street in the Area. Later on, they were identified as they were members of the Palestinian resistance, namely: Sedqi Siddiq Zakarneh (29), and Tareq Fawzi ‘Issa Salem (Al-Dajm) (26). According to investigations conducted by PCHR, there were no clashes in the area, nor eyewitnesses at the time of the shooting attack.

Moments later, an Opel Corsa Palestinian vehicle carrying 4 citizens were driving to their work in Israel and stopped on the right of the road as other vehicles arrived behind it on the Street.

Meanwhile, a Palestinian ambulance arrived as a number of civilians got out of their vehicles and went in the ambulance to help the paramedics to evacuate the two dead bodies from the place when IOF snipers opened fire at the civilians and paramedics, killing ‘Ata Yaseen Mahmoud Al-Shalabi (46), a worker from Qabatiya town in Jenin, after he was shot with 7 bullets, one in the head and the rest in the abdomen as he was trying to carry one of the dead bodies from the Place.

Citizens and paramedics were able to transfer the 3 dead bodies to Al-Razi and Ibn Sina Hospitals in Jenin. Later, IOF reinforcements arrived and broke into the area to secure the withdrawal of Israeli special force. Before withdrawing, at around 06:00, IOF arrested 3 civilians, raided and searched the Ministry of Culture building on the Street.

It is worth noting that extrajudicial killings are carried out pursuant to IOF intelligence services’ knowledge, and those who wanted are killed instantly rather than arresting them. Therefore, IOF play in these operation the judge’s roles by deciding a death sentence and executing it.

PCHR condemns in the strongest terms the assassination crime and the killings without any justification and emphasizes that IOF have always used this type of crimes in the recent years against the Palestinians in light of international community silence, particularly the High Contracting Parties to the Fourth Geneva Convention, and inaction to stop these crimes and take effective measures against the Israeli occupation, encouraging Israel to commit further war crimes against the Palestinians.

PCHR reiterates its call upon the international community to take immediate action to end Israeli occupation’s crimes and demands the High Contracting Parties to the Fourth Geneva Convention fulfil their obligations as per Common Article 1 of the Convention, “undertake to respect and to ensure respect for the present Convention in all circumstances,” and their obligations under Article 146 of the same Conventions, i.e., to hold accountable persons accused of committing grave breaches of the Convention.