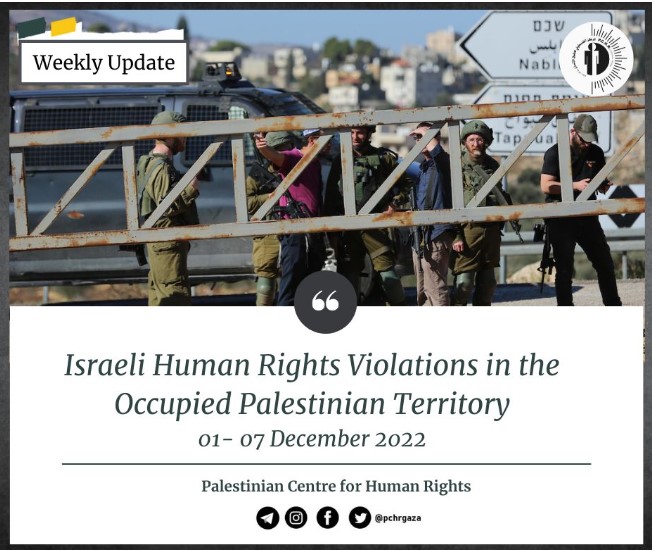 Two Palestinian civilians were killed, and 18 others, including 3 children, were injured, while dozens of others suffocated in Israeli Occupation Forces (IOF) attacks in the Gaza Strip and West Bank, including occupied East Jerusalem.

On 12 December 2022, ‘Ammar Mefleh (23) was killed after being executed in cold blood when one of the Israeli Border Police officers opened fire at him from a gun on the main street in Huwara village, Nablus. ( Details are available in PCHR’s press release).

On 05 December 2022, ‘Omar Manna’a (23) was killed after IOF opened fire at him and left him to bleed to death during the latter’s incursion into al-Dheisheh refugee camp in Bethlehem. ( Details are available in PCHR’s press release).

Meanwhile, those injured were victims of excessive use of force that accompanied IOF’s incursion into the Palestinian cities and villages, or suppression of peaceful protests organized by Palestinian civilians, and they were as follows:

On 01 December 2022, a Palestinian was wounded in his feet after IOF opened fire at him and then arrested him before taking him to Hadassa Hospital- ‘Ein Kerem in clashes near the annexation wall gate in Beit Duqqo village in East Jerusalem.

On 03 December 2022, a Palestinian was wounded with a rubber-coated metal bullet during clashes with IOF at the entrance to Qasra village, southern Nablus.

On 06 December 2022, 3 Palestinians were wounded in clashes with IOF near Psagot settlement established on the Palestinian lands of Jabal al-Taweel area, al-Bireh.

In the Gaza Strip, on 04 December 2022, IOF’s warplanes carried out several strikes on an agricultural land in al-Shokah village, Rafah and another in eastern Deir al-Balah in the central Gaza Strip, causing damage without reporting any casualties.

IOF demolished 2 tents used as classrooms and confiscated them with the desks as well as demolishing 4 agricultural rooms and 2 facilities and razing agricultural lands in the West Bank, including occupied East Jerusalem. Details are as follows:

On 04 December 2022, IOF demolished a tinplate room in western Dura, Hebron, noting that the owner built it only 10 days ago on the rubble of his house that was demolished by IOF for the second time on 06 October 2022.

On 07 December 2022, Israeli vehicles razed an agricultural land and destroyed a retaining wall in al-Walajah, Bethlehem, under the pretext of unlicensed construction.

”Since the beginning of 2022, IOF made 137 families homeless, a total of 805 persons, including 158 women and 368 children. This was the outcome of IOF demolition of 154 houses and dozens of residential and agricultural tents. IOF also demolished 109 other civilian objects, leveled vacant areas of land and delivered hundreds of notices of demolition, cease-construction, and evacuation.

Israeli settlers carried out 4 attacks that included demolishing an archeological hotel’s internal walls and assaulting Palestinian vehicles as well as uprooting trees. Details are as follows:

On 02 December 2022, settlers from “Ateret Cohanim” organization destroyed the internal archeological walls of “Little Petra” Hotel, which is part of and annexed to Petra Hotel overlooking ‘Omar Square in Bab al-Khalil area, East Jerusalem, preluding to seize it completely.

On 04 December 2022, settlers backed up by IOF assaulted Palestinian vehicles passing via the western entrance to Huwara village in Nablus and broke the windows of some of them as well as causing damage to their structures.

In the afternoon, 4 settlers assaulted with batons a Palestinian vehicle at Yitsihar settlement intersection in Nablus and broke the front and side windows before the driver could flee away.

”Since the beginning of the year, settlers conducted at least 253 attacks. In two of the attacks, 2 Palestinians were killed.

IOF carried out 165 incursions into the West Bank, including occupied East Jerusalem. Those incursions included raids and searches of civilian houses and facilities and establishment of checkpoints. During those incursions, 85 Palestinians were arrested, including 14 children and 4 women.

On 05 December 2022, IOF closed the entrance to al-Jalazone refugee camp, northern al-Biereh, with cement cubes and remain it closed so far.

On 07 December 2022, IOF reclosed checkpoints and detector gates in East Jerusalem and Bethlehem and later reopened them while keeping restrictions on movement.

”So far in 2022, IOF established at least 4,266 temporary military checkpoints and arrested 191 Palestinians at those checkpoints