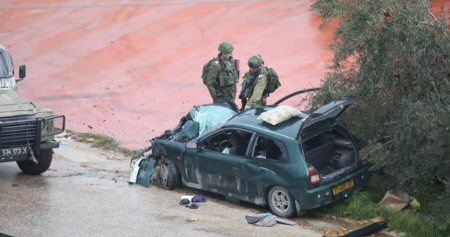 An investigation, conducted on Tuesday by the Palestinian Center for Human Rights (PCHR), has refuted Israeli claims about the alleged car-ramming attack in western Ramallah, describing what happened as a “new crime of excessive use of force.”

“At early dawn hours of Monday, 04 March 2019, in new crime of excessive use of lethal force against Palestinian civilians, Israeli forces killed two Palestinian civilians in Kafur Nei’mah village, west of Ramallah, and wounded another one,” PCHR started, its investigative report.

“The Israeli forces claimed that the three civilians carried out a run-over attack, which resulted in the injury of two Israeli soldiers. Other Israeli soldiers opened fire at them, killing two of them and wounding another one,” the report added, according to Days of Palestine.

However, “investigations and eyewitnesses’ statements refute the Israeli forces’ claims. The eyewitnesses said that the three civilians were heading to their work at a bakery, where they should be at early hours. While the civilians were on their way to work, they were surprised with Israeli vehicles and crashed one of them. As a result, the civilians’ car hood was damaged,” the report elaborated.

“According to investigations conducted by the Palestinian Center for Human Rights (PCHR), at approximately 02:30 on Monday, Israeli forces backed by three military vehicles moved into Kafur Nie’mah village, west of Ramallah. They raided and searched a house belonging to Yousef Mahmoud al-Deek (42) and arrested him, taking him at the village entrance, where the Israeli vehicles stationed. One of the Israeli vehicles was damaged before their withdrawal from the village. At approximately 03:20, the three [victimized] civilians were heading to their work via a car with an Israeli registration plate. Meanwhile, the driver was surprised with Israeli vehicles at the village’s entrance. As a result, the driver could not control the car and crashed one of the Israeli vehicles. The Israeli soldiers immediately opened fire at the civilians, killing two of them and wounding another one. The wounded civilian was arrested while the victims’ bodies were kept in the Israeli custody.”

“The two victims were identified as Ameer Mahmoud Darraj (20), from Khebitha al-Mosbbah village, and Yousef Raied Anqawi (20), from Beit Sirah village. The wounded civilian was identified as Hitham Basem ‘Alqam (20), from Safa village, west of Ramallah,” according to the report.

“I was heading to my work at Itihad Juice Company, which is located at the entrance to Kafur Nie’mah village. I passed through the city center and I did not notice any suspicious movements. It was approximately 03:00 and the weather was rainy and foggy. When I was on the village’s road, the vision was clear, as there were lights on the road, but when I exited it and moved towards the company, the road was sloppy and there was no lights. When I was around 150 away from the company, I was surprised with Israeli soldiers deploying on the road. I recognized that they were Israeli soldiers as one of them lighted military torches at me. I was driving at approximately 30 km/h and I was around 6-10 meters away from them. One of them stopped me and said in Arabic, ‘get away from here, one of our vehicles is damaged.’ I moved back, I was around 150 meters away from them, and it was approximately 03:20. I saw a car driving at approximately 60-70 km/h coming from the village and moving in the same direction. They lighted the military torches at it. The car then deviated from its path and hit the Israeli military vehicle that was blocking the road. I heard the crash and minutes after, I heard continuous shooting and I estimate that 15-20 bullets were fired.”

PCHR has condemned the crime and expressed its concern over the Israeli use of lethal force against Palestinian civilians.

PCHR also called on the international community and UN bodies to stop Israel’s escalating crimes and violations and work on providing international protection for the Palestinians in the occupied territories.

03/05/19 Homes of Two Slain Palestinians to be Demolished