Homes of Two Slain Palestinians to be Demolished 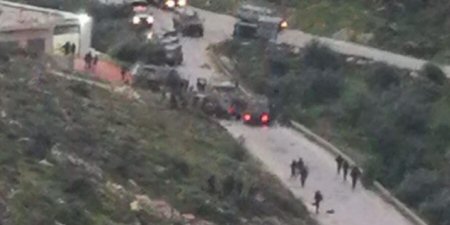 Israeli forces shot dead two Palestinians and a third was lightly injured, Monday morning, at the entrance of Kafr Naama village, near the West Bank city of Ramallah.

The army claims that two soldiers were wounded in a pre-dawn car-ramming attack in the northern West Bank, on Monday, saying  that forces opened fire on the three occupants of the vehicle, killing two and wounding the third.

They added, in their claims, that Palestinians rammed their vehicle into a number of soldiers who had stopped by the side of the road, at the entrance to the village.

The killing was slammed as “a heinous crime committed in cold blood” and as an “extrajudicial execution,” by the Palestinian Foreign Ministry, while Israeli Prime Minister Benjamin Netanyahu said that he will “speed up the demolition of the houses of the two youths,” whom he called murderers.

The ministry additionally called on the International Criminal Court (ICC) to speed up its investigation of Israeli crimes against the Palestinian people, WAFA reported.

Israeli forces closed Beit El (DCO) Israeli military checkpoint, near the northern entrance of al-Bireh city, to Palestinian traffic leaving the city of Ramallah, following confrontations that broke out to condemn the  killing.