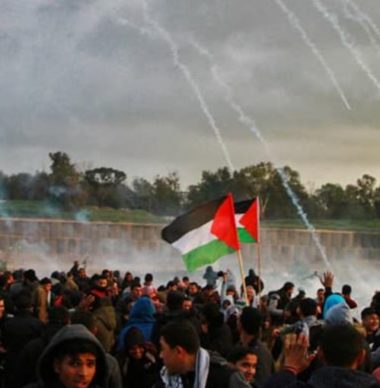 Israeli soldiers attacked, on Monday evening, many Palestinian protesters on lands near the perimeter fence, in the Central District of the besieged Gaza Strip.

Media sources said dozens of Palestinians protested east of the al-Boreij refugee camp, and burnt tires, before the soldiers fired several live rounds, gas bombs and concussion grenades at them.

The Palestinians also used fireworks and hurled stones at the soldiers.

Palestinian sources said that the incident was a traffic accident, and not a ramming attack as the military claims, as the driver and his passengers could not see the soldiers before hitting them with the car.

The Palestinian car slid due to the wet road, before it struck the army jeep, they added.

Khaldoun ad-Deek, the head of Kafr Ni’ma Village Council, said the accident happened in an area of a difficult terrain with rough and curvy roads.