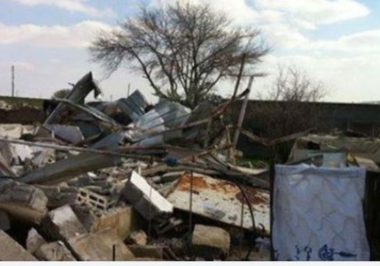 The soldiers invaded an area at the western junction of Hares village, before demolishing the structures, owned by Hasan Saleh Suleiman.

Fadi, the son of Hasan Suleiman, said the structures were built on the family’s own land, and occupied nearly 300 square/meters, and added that the army demolished, late last year, other structures owned by the family.

He stated that the army did not provide any justification for demolishing the properties.

On Monday at dawn, the soldiers invaded the al-Jalazoun refugee camp, north of the central West Bank city of Ramallah, searched homes and abducted one Palestinian.

Also at dawn, the soldiers killed two Palestinians and injured one, in Kafr Ni’ma village, west of Ramallah.

In related news, the soldiers invaded and violently searched, on Monday at dawn, dozens of  homes in occupied Jerusalem, and abducted at least ten Palestinians, in addition to summing one for interrogation.

in the Gaza Strip, Israeli navy ships opened fire at several Palestinian fishing boats in Gaza territorial waters, close to the shore in the northern part of the besieged coastal region.