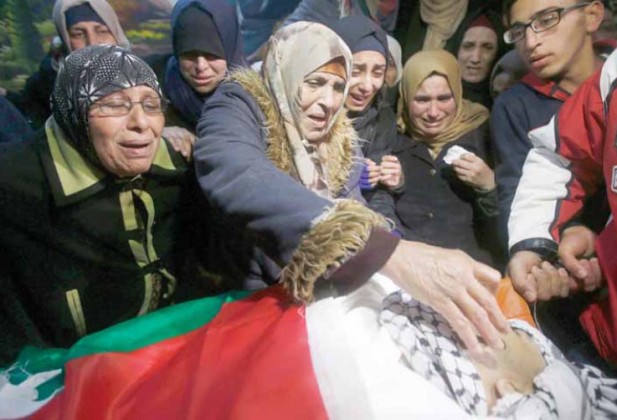 In the West Bank, on 8 January 2017, Israeli forces killed Fadi al-Qunbar (28) from al-Mukaber Mount village, southeast of occupied Jerusalem, when he drove his truck into a group of Israeli soldiers, who were in the bus station near “Armon Hanatziv” settlement established on the lands of the aforementioned village. As a result, 3 Israeli soldiers and an officer were killed.

In a new crime of extra-judicial execution, on 10 January 2017, Israeli forces shot dead in cold blood Mohammed al-Salhi (30) in al-Far’ah refugee camp, south of Tubas, with five bullets from a gun with a silencer. As a result, he was killed in front of his elderly mother.

In the same context, Israeli forces wounded the photojournalist of “TransMedia” Agency, al-Muthana al-Deek, with a gas canister to his right leg while he was covering a protest organized by dozens Palestinian civilians and activists in the Northern Valley against settlement activities. After he was wounded, the Israeli soldiers beat him and the “Palestine Today” Reporter, Amoun al-Sheikh.

During the reporting period, Israeli forces conducted at least 54 military incursions into Palestinian communities in the West Bank. During these incursions, Israeli forces abducted at least 58 Palestinian civilians, including 9 children and 3 women. 18 of them, including 6 children and 3 women, were abducted in occupied Jerusalem.

On 08 January 2017 following a run-over attack carried out by Fadi al-Qunbar (28), from al-Mukaber Mount village, near Armon Hanatzie settlement, Israeli forces started a series of collective punishments against the family and relatives of the aforementioned. Israeli forces raided their houses and abducted a number of his relatives. They also removed a mourning tent established for Fadi and threatened to demolish his family house after taking its measurements.

As part of the estate seizure policy, on 08 January 2017, settlers seized a residential building in al-Rababah Valley neighbourhood in Silwan village, south of the Old City in occupied Jerusalem. The 2-storey building, which belongs to ‘Ali Mohammed Ahmed Sarhan, was built on an area of 140 square meters. The neighbours said that settlers belong to “al-‘Aad” settlement association that is active in Silwan to seize more buildings there.

In the Gaza Strip, in the context of targeting the border areas, on 10 January 2017, Israeli forces stationed along the border fence between the Gaza Strip and Israel opened fire at the agricultural fields, east of al-Maghazi in the central Gaza Strip, to the west of the aforementioned border. However, no casualties were reported.

Israeli colonial settlers, supported by the Israeli military, continued this week in their stated effort to push Palestinians out of the areas that they wish to lay claim to for the expansion of the state of IsraelOn 10 January 2017, Israeli forces levelled a 1300-meter waterline leading to the civilians’ houses between ‘Atouf area and Ras al-Ahmar. The waterline feeds residential compunds in the Northern Valley area, which is ‘Atouf and al-Ras al-Ahmar. The agricultural land leading to Kherbet al-Hadidyah was levelled by the Israeli bulldozers.

In the same context, on 08 January 2017 following the run-over attack in occupied Jerusalem, dozens of Israeli settlers gathered at the intersection of “Yitsihar” settlement branching from Ramallah-Nablus Street, south of Nablus. The settlers closed the Street and threw stones at the Palestinian civilian cars. As a result, the cars’ windows were broken and its structures were damaged.

On 11 January 2017, Israeli forces levelled an agricultural land between al-Bweib area in Masafer Yatta and Bani Na’im village, east of Hebron. Israeli forces claimed that the Israeli carried out the demolition without having an approval from the Israeli competent authorities.

At approximately 11:00 on Thursday, 15 January 2017, dozens of Palestinian civilians and activists organized a demonstration in al-Hemmah area in the Northern Valley, east of Tubas. The protestors attempted to remove a tent established by a settler in the area, but existence of Israeli soldiers and settlers in the area prevented them from doing so. Following this, the protestors moved to “Qozh” settlement outpost located between “Salit” and “Makhula” settlements and is one kilometer away from “Qozh” The participants headed traveling their cars along with the press crews, who came to cover the demonstration, towards Street (90) to approach the abovementioned settlement outpost. Israeli forces, who were about 400 meters away from them, closed the street by their jeeps while other soldiers banned the participants from moving forward. When the participants stepped out of their cars, the Israeli soldiers immediately fired sound bombs at them. In the meantime, Amoun al-Sheikh, a report at Palestine Today Channel, al-Muthana Samir Abdullah al-Deek, a photojournalist at TransMedia Company, were standing about 3 meters away from the soldiers and participants as they were covering the events. When a soldier saw them, he threw a tear gas canister at them that hit al-Deek’s right hand. As a result, both of them sustained tear gas inhalation. A soldier, who was holding a baton, rushed towards them and hit al-Sheikh at her abdomen and pushed her. He then hit al-Deek several times on his abdomen, so the camera fell off al-Deek’s hands to the ground. When he attempted to carry the camera, the soldier continued beating him on his abdomen and pushing him. The soldier then pushed both journalists into their car and closed its door. Al-Deek arrived by his car at a place where Palestinian ambulances parked. He was taken to Tubas Turkish Hospital where he underwent medical tests. Al-Deek was then transferred to Arab Specialist Hospital in Nablus.

Following the Friday prayer, on 06 January 2017, dozens of Palestinian civilians and Israeli and international human rights defenders organized demonstrations in Bil’in and Ni’lin villages, west of Ramallah, and al-Nabi Saleh village, northwest of the city, and Kafer Qadoum village, northeast of Qalqiliyah, protesting against the annexation wall and settlement activities. Israeli forces forcibly dispersed the protests, firing live and metal bullets, tear gas canisters and sound bombs. They also chased the protesters into olive fields and between houses. As a result, many of the protesters suffered tear gas inhalation while others sustained bruises as Israeli soldiers beat them up.

Due to the number and severity of this week’s attacks on Palestinian civilians by Israeli armed forces and settlers, the PCHR made several recommendations to the international community, including a recommendation that states that apply the principle of universal jurisdiction not surrender to Israeli pressure to limit universal jurisdiction to perpetuate the impunity enjoyed by suspected Israeli war criminals.

In affition, the PCHR calls upon the international community to act in order to stop all Israeli settlement expansion activities in the Occupied Palestinian Territories through imposing sanctions on Israeli settlements and criminalizing trading with them.