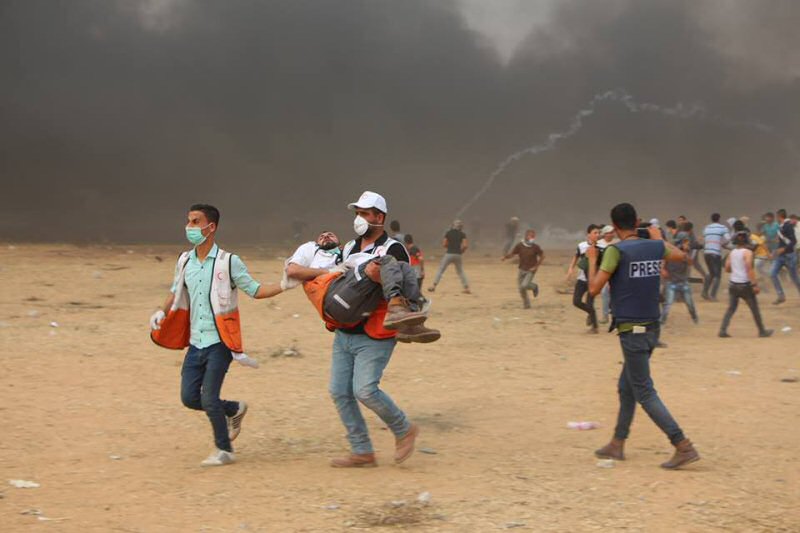 Israeli forces continued with systematic crimes in the occupied Palestinian territory (oPt) for the week of 03 ‚Äì 09 May, 2018.

In the Gaza Strip, in a new crime of using lethal forces, on 06 May 2018, Israeli forces killed 3 Palestinian civilians and detained the body of one of them.¬Ý This occurred 10 meters away from the border fence between the Gaza Strip and Israel, east of Khan Younis in the southern Gaza Strip.¬Ý One of those killed was attempting to reach two wounded persons when the Israeli soldiers opened fire at him and he fell.¬Ý Following this, on his twitter account, the spokesperson of the Israeli forces tweeted that ‚ÄúAfter investigating the attempt to sneak incident, it turned out that a cell comprised of 4 persons arrived at the security fence to sneak into Israel and carry out ‚Äúa sabotage attack!‚Äù‚Äù PCHR‚Äôs investigations emphasize that those four civilians did not cross the border fence contrary to the spokesperson‚Äôs claims and were targeted at least 50 meters away from the border fence.¬Ý The investigations added that one of those killed came from his house after hearing the gunfire and attempted to rescue and evacuate the targeted civilians.¬Ý Thus, the Israeli forces could have used a less-lethal force specially that that those civilians were unarmed.

Medical sources at al-Shifa Hospital in Gaza City declared on 03 May 2018 that Anas Abu ‚ÄòAser (19) from al-Sabrah neighborhood succumbed to wounds he sustained on Friday 27 April 2018, while participating in the March of Return and Breaking Siege demonstrations in eastern al-Zaytoun neighborhood, east of Gaza City.

This high number of casualties in the Gaza Strip proves that the Israeli forces continue to commit crimes and use excessive force against Palestinian civilians in disregard for their lives and upon an official political decision. PCHR indicates that according to Israeli forces‚Äô spokesperson on his Facebook page following the declaration of organizing these demonstrations commemorating the 42nd¬Ýanniversary of the Land Day, the Israeli forces prefigured the demonstrations, whose organizers previously declared they would be peaceful, sending threatening messages to intimidate the organizers and Gaza Strip residents and deploying Israeli snipers along the border fence.

According to investigations and field observations by PCHR‚Äôs fieldworkers for the Fifth Friday of the March of Return and Breaking Siege demonstrations:

During the reporting period, Israeli forces conducted at least 70 military incursions into Palestinian communities in the West Bank and 12 similar ones into Jerusalem and its suburbs. During those incursions, Israeli forces arrested at least 66 Palestinians, including 12 children; (4 of them were arrested while the Israeli forces were protecting the settlers who attacked Madma village, south of Nablus) in the West Bank.¬Ý Meanwhile, 34 civilians, including 10 children and a woman, were arrested in Jerusalem and its suburbs.

Efforts to Create a Jewish Majority in East Jerusalem:

As part of the Israeli settlement expansion, house demolition notices and demolitions, on 07 May 2018, the family of Rami Yousif ‚ÄòAwadallah self-demolished a floor comprised of rooms, a kitchen and bathroom in Qalendia village, north of occupied East Jerusalem upon a decision issued by the Israeli Municipality.¬Ý The abovementioned civilian established those rooms above his already built house.¬Ý In the same context, the family of Hasan Shahham self-demolished their warehouses in the above-mentioned village on the same grounds to avoid paying high fines imposed by the Israeli municipality in case its vehicles carried out the demolition.

On the same day, Israeli forces demolished a commercial facility for construction materials in Beit Safafa village, south of East Jeursalem, under the pretext of building without a license.¬Ý The facility was built on an area of 60 square meters belonged to Ahmed al-‚ÄòAbbasi.

On 08 Mary 2018, Israeli municipality vehicles demolished a commercial facility (petrol station) in al-‚ÄòIssawiya village, northeast of occupied Jerusalem, under the pretext of illegal construction.¬Ý Member of the Local Follow-up Committee said that the Israeli forces moved into the village and demolished the facility belonging to Khalil Mahmoud without having a judicial demolition order.¬Ý They then arrested the owner after he objected to the demolition saying he has legal papers proving the facility is licensed.

As part of seizure of Palestinian civilians‚Äô property in favor of the settlement associations, on 05 May 2018, ‚Äú‚ÄòAtarit Cohanim‚Äù settlement association handed the family of Jawad Abu Sneinah a house eviction order¬Ý in the central neighborhood in Silwan village, south of East Jerusalem‚Äôs Old City, claiming their ownership of the building.¬Ý Zuhair al-Rajabi, Head of the Central Neighbourhood Residents Committee, said that a group of Israeli settlers from ‚ÄúAteret Cohanim‚Äù association raided a house belonging to Jawad Abu Suninah, handed his family an eviction order and gave him until 25 June 2018 to implement the order, in addition to paying NIS 19,000 as a rent allowance for 3 years. He added that Abu Suninah Family house is in a 5-storey building, which was sold to the ‚ÄúAteret Cohanim‚Äù association by Jamal Sarhan in August 2015. At that time, all the building was seized, except the apartment where tenant Abu Suninah lived as he refused to leave. Abu Suninah renewed the rent for a year before the building was seized. Al-Rajbi added that Sarhan Family filed a lawsuit against Jamal Sarhan after selling the building in an attempt to return it. al-Sarhan Family clarified that this building belongs to Jamal‚Äôs father, so Jamal does not have the right to sell and buy. At that time, the judge delayed issuing a final decision in this case and the building remained for settlers, except Abu Suninah‚Äôs apartment.

As part of restrictions imposed on the Jerusalem-based organizations‚Äô work, on 05 May 2018, the Israeli police confiscated equipment used by al-Aqsa Society in an attempt to obstruct an activity organized by the society to clean al-Aqsa Mosque and Islamic Cemeteries in Jeurslem‚Äôs Old City.¬Ý The police searched the Palestinian civilians at al-Aqsa gates and confiscated the equipment provided by the society for the cleaning.¬Ý Despite all of this, the Palestinian volunteers cleaned al-Aqsa Mosque yards and al-Yousifiyah and al-Rahmah cemeteries in addition al-Makaqsed Cahrity Hospital.

Settlement Activities, Demolitions, and Settlers‚Äô Attacks against Palestinian civilians and their Property:

On the same day, Israeli forces confiscated a barrack built of tin plates and a 250-square-meter agricultural greenhouse used for selling seedlings and fertilizes, under the pretext of non-licensing in Beit Za‚Äôtah area, east of Beit Ummer village, north of Hebron.¬Ý This property belongs to Ramzi Nabil Abed al-Rahman Abu ‚ÄòAyyiash.

On 04 May 2018, the Israeli authorities notified ‚ÄòIsaa al-Atrash to stop the construction works in his 120-square-meter house in ‚ÄòEin Jouwaizah area, northeast of the village, under the pretext of non-licensing and aiming at seizing lands and annexing them to the Municipal boundaries of Jerusalem.

On 09 May 2018, Israeli forces demolished a 70-square-meter house, which was comprised of 2 rooms and a living room built of tin plates, in Bab al-Sha‚Äôab area.¬Ý The house belongs to Mahmoud Ibrahim Mohamed Mahmoud, from al-‚ÄòIssawiyia village, northeast of occupied Jerusalem. Mahmoud built the house to live with his wife and two brothers with disabilities after he incurred losses as well shortly before due to the demolition campaign targeting al-‚ÄòIssawiyah village.

As part of the Israeli settlers‚Äô attacks against Palestinian civilians and property, on 07 May 2018, a group of Israeli settlers from¬Ý ‚ÄúYitzhar ‚Äúsettlement established in the southern side of Madama village, south of Nablus, attacked under the Israeli forces‚Äô protection Palestinian civilian houses. A number of the village residents then confronted the settlers while the Israeli forces arrested 4 children after chasing them in the area. When A ‚ÄòAbeer Mousa Abed al-Kareem Ziyada (39) attempted to rescue her son, the Israeli forces pepper-sprayed her face, so she fell on the ground. ‚ÄòAbeer was then taken to Rafidia Hospital in Nablus to receive medical treatment.

Use of Force against Demonstrations in Protest against the U.S. President‚Äôs Decision to Recognize Jerusalem as the Capital of Israel:

Continuing the demonstrations in protest against the U.S. President Donald Trump‚Äôs declaration to recognize Jerusalem as the capital of Israel and move the U.S. Embassy to it, Palestinian civilians organized protests against the decision throughout the West Bank and Gaza Strip. They further organized peaceful demonstrations where ten thousands of civilians participated on the 42nd¬ÝAnniversary of the Land Day in the West Bank and Gaza Strip.

PCHR warns of the escalating settlement construction in the West Bank, the attempts to legitimize settlement outposts established on Palestinian lands in the West Bank and the continued summary executions of Palestinian civilians under the pretext that they pose a security threat to the Israeli forces. PCHR reminds the international community that thousands of Palestinian civilians have been rendered homeless and lived in caravans under tragic circumstances due to the latest Israeli offensive on the Gaza Strip that has been under a tight closure for almost 11 years. PCHR welcomes the UN Security Council‚Äôs Resolution No. 2334, which states that settlements are a blatant violation of the Geneva Conventions and calls upon Israel to stop them and not to recognize any demographic change in the oPt since 1967.¬Ý PCHR hopes this resolution will pave the way for eliminating the settlement crime and bring to justice those responsible for it. PCHR further reiterates that the Gaza Strip and the West Bank, including East Jerusalem, are still under Israeli occupation in spite of Israel‚Äôs unilateral disengagement plan of 2005.¬Ý PCHR emphasizes that there is international recognition of Israel‚Äôs obligation to respect international human rights instruments and international humanitarian law.¬Ý Israel is bound to apply international human rights law and the law of war, sometimes reciprocally and other times in parallel, in a way that achieves the best protection for civilians and remedy for the victims.

Fully detailed document available at the official webiste of the Palestinian Centre for Human Rights (PCHR).