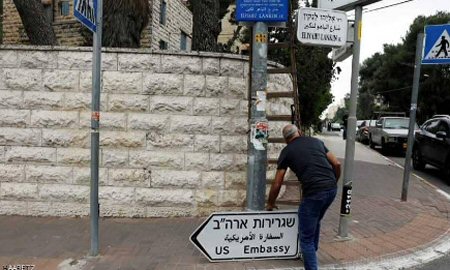 The US diplomatic delegation to Israel changed, this week, the location of the US Embassy, on Twitter, from Tel Aviv to Jerusalem.

“The name of the official account has been changed to the US Embassy in Jerusalem, and we are still looking for a suitable picture,” US embassy tweeted, according to Al Ray.

Last Monday, Israeli authorities put up banners with the words “American Embassy,” in the Arnona neighborhood of occupied Jerusalem, in preparation for the opening of the embassy next Monday, which coincides with the 70th anniversary of Nakba,  when Israel established its official state.

Report: Ongoing Nakba Must End — Time Has Come for the International Community to Act