Report: Ongoing Nakba Must End — Time Has Come for the International Community to Act 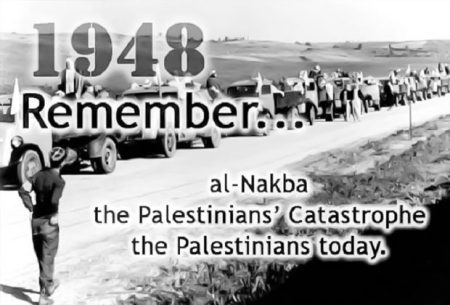 The Palestinian Human Rights Organizations Council has issued a statement entitled: “The ongoing Nakba must end: the time has come for the international community to act.” (WAFA)

For the Palestinian people, 70 years of Nakba means seven decades of subjugation by Israel, characterized by occupation, apartheid and colonial policies and practices. It also attests to the chronic inaction and failure of the international community to fulfill its obligations and responsibilities under international law, to a lack of accountability and protection, and to the continued support of a shallow and biased peace process incapable of bringing about peace or justice. Nevertheless, after 70 years of Nakba, the Palestinian people remain resolute in demanding their most fundamental rights to return and self-determination.

Today, at least 8.26 million of 12.7 million Palestinians are forcibly displaced worldwide as a result of Israel’s ongoing policies of population transfer, annexation and colonization. Israel has persisted in its denial of reparations, refusing forcibly displaced Palestinians the right to return, restitution, compensation and guarantees of non-repetition as articulated in numerous UN resolutions. The remaining one third of non-displaced Palestinians, spread across Mandatory Palestine, is subject to ongoing policies of forcible displacement by Israel.

In recent years there has been a growing campaign led by Israel and the United States (U.S.) to terminate the UN Relief and Works Agency for Palestinian Refugees (UNRWA), the international body mandated to provide humanitarian assistance to Palestinian refugees. This is not the first attempt by Israel to delegitimize UNRWA, nor is it the first time a U.S. administration has withheld, or threatened to withhold, funding to UNRWA as a form of political blackmail. The voluntary nature of UNRWA’s funding, however, has made the provision of its services dependent of the will of donors and, consequently, has rendered it vulnerable to political pressure and interference. In fact, a historical analysis of Israel’s demands and U.S. conduct from the outset of the Oslo ‘peace process’ reveals an organized and targeted strategy designed to eradicate the fundamental rights of Palestinians in general, and the rights of Palestinian refugees and internally displaced persons in particular. This strategy is intricately linked to the demise of UNRWA, which serves as a reminder of the international community’s failure to find a viable solution for the world’s largest and longest standing displaced population. This situation has resulted in a severe financial crisis at UNRWA that has significantly affected the Agency’s capacity to provide the most basic services to Palestinian refugees.

On 6 December 2017, U.S. President Trump announced Jerusalem as the capital of Israel, becoming the first state in the world to recognize Israel’s unlawful annexation of the city. International consensus over the past seven decades has rejected claims by Israel to sovereign rights over the city of Jerusalem and condemned Israeli measures that have sought to alter the character of the city as having no legal validity, as reaffirmed by numerous UN resolutions. U.S. President Trump broke with this international consensus by recognizing Jerusalem as the capital of Israel and ordering the relocation of the U.S. Embassy from Tel Aviv to Jerusalem. Trump’s declaration not only violates international law, it also deepens Israel’s unlawful annexation of East Jerusalem and illegal colonial and settlement enterprise in and around the city. Moreover, the declaration signifies a change in policy regarding final status issues which directly affect the conflict. The U.S.’s recent policies vis-à-vis Palestinian refugees, UNRWA and Jerusalem show a clear bias in favor of Israel, rendering the U.S. unfit to play a mediating role in peace efforts.

With the chronic lack of just and durable solutions, Palestinians organized marches demanding the right of return in the 1990s. The March of Return has been organized by Palestinians in Israel annually since 1998, each year taking place in a different village forcibly depopulated during the Nakba. The march has become the biggest event of the year for Palestinian citizens of Israel, with growing participation across the political and geographical spectrum, as well as from Palestinian youth. More recently in the Gaza Strip, the Great March of Return has seen thousands of Palestinians protesting for the realization of their fundamental rights and the end of the eleven years closure of the Gaza Strip.

Israel has responded to these protests with excessive, lethal force. Since the march started on 30 March 2018, Israeli forces have killed 40 Palestinians at the protests,including five children, two journalists, and two people with disabilities. Approximately 4,000 people have also been injured, over 2,000 from live ammunition. The willful killing and injuring of unarmed protesters represents a flagrant violation of international human rights law and constitutes a grave breach of the Fourth Geneva Convention. It also constitutes a crime under the Rome Statute of the International Criminal Court. These practices attest to the continued domination and subjugation of the Palestinian people. The marches, and Israel’s excessive use of force and unlawful killings, demonstrate the urgent need to ensure protection for the Palestinian people and to hold Israel to account in accordance with international law.

The inalienable rights of the Palestinian people, principally to self-determination and reparations for forcible displacement, cannot be ensured by the humanitarian and political approaches currently deployed by the international community, which are based on an immense imbalance of power and lack any foundation in international law. Any just and durable solution to the Palestinian Question must begin with the adoption of a rights-based approach. Failure to do so will maintain a status quo in which international protection is absent, and in which Palestinians are condemned to a fate of acute hardship and further displacement. The passivity of the international community not only impacts those who have already been displaced, but also encourages further displacement as Israel continues to enjoy impunity for systematic and grievous violations of international law.

PHROC believes that a just and durable solution is impossible without the adoption of a strategy based upon justice, international law, and relevant international resolutions, including UN General Assembly Resolution 194 and UN Security Council Resolution 237. It reasserts that the international community must: