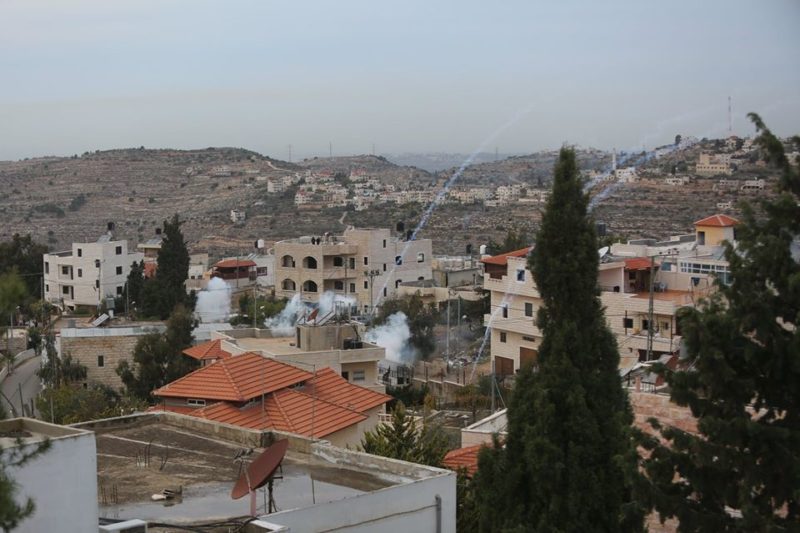 In terms of excessive use of force, IOF wounded 57 Palestinian civilians in the West Bank and Gaza Strip.  In the Gaza Strip, IOF wounded 49 civilians, including 23 children, 3 women, and 2 paramedics, including a woman, on the 83rd Friday of the Great March of Return and Breaking the Siege protest (GMR). An employee at Jabalia Municipality was shot and injured after IOF opened fire at him while he was on duty at the border area. Meanwhile in the West Bank, 7 civilians were injured; 6 of them were injured near the annexation wall during their attempt to sneak into Israel for work.

Under IOF incursions and house raids, 94 incursions into the West Bank, including occupied East Jerusalem, were reported. Those incursions included raids of civilian houses and shootings, enticing fear among civilians, arresting and/or injuring many others. During this week’s incursions, 58 Palestinians were arrested, including 4 children, 4 women (3 of them are journalists).  On 06 December 2019, IOF arrested the crew of Palestine Satellite Channel during their morning show “Good Morning Jerusalem” and arrested one of the guests, a former prisoner. IOF also arrested 2 civilians near the border fence in eastern Rafah and fired tear gas canisters at al-Najjar neighbourhood in Khuza’ah, east of Khan Younis, in the Gaza Strip.

Under the settlement expansion activities in the West Bank, PCHR documented 4 IOF violations that included demolishing 3 residential houses and razing a 200-square-meter land in Hebron, in addition to 27 dunums of Kafer Laqef village, east of Qalqiliyah to establish an industrial area to be annexed to “Karnei Shomron” settlement. Moreover, a civilian was forced to self-demolish his house in occupied Jerusalem.

PCHR also documented 2 settler-attacks against Palestinian civilians and their property, including stoning a vehicle in Nablus, and puncturing tires of 160 vehicles in Jerusalem, in addition to vandalization.

In terms of the Israeli closure policy, the Gaza Strip still suffers the worst closure in the History of the Israeli occupation of the oPt as it has entered the 14th consecutive year, without any improvement to the movement of persons and goods, humanitarian conditions and bearing catastrophic consequences on all aspects of life. Furthermore, IOF uses Erez Crossing that is designated for movement of individuals as an ambush to arrest Palestinians who obtain permits to exit via Israel.  Meanwhile, the West Bank is divided into separate cantons with key roads blocked by the Israeli occupation since the Second Intifada and with temporary and permanent checkpoints, where civilian movement is restricted and they are subject to arrest as 3 Palestinians were arrested this week only.

On the 83rd Friday, 06 December 2019, weekly protests were launched in the 5 Great March of Return (GMR) encampments in eastern Gaza Strip. This Friday’s protest titled: “GMR Will Continue”, resulted in the injury of 49 civilians, including 23 children and 3 women, and 2 paramedics, including a woman.

“At approximately 15:30 on Friday, 06 December 2019, during my participation at the GMR protests, I was directly hit with a tear gas canister in my right eye. I was taken to the field hospital, which is about 1000 meters away from where I was. After receiving first aid, I was referred to al-Aqsa Hospital in Deir al-Balah. After that, I was referred to Eye Specialty Hospital in al-Nasser neighborhood, Gaza City, and then transferred to al-Shifa Hospital to for a CT scan. Later, I returned to the Eye Specialty Hospital. At approximately 21:15, I had a surgery to remove my right eye. On Sunday, 08 December 2019, I was referred again to al-Shifa Hospital and I am still receiving medical treatment.”

Full document available at the official website for the Palestinian Centre for Human Rights (PCHR).