Over 2000 Palestinians Participate in Peaceful Protest at Gaza Border 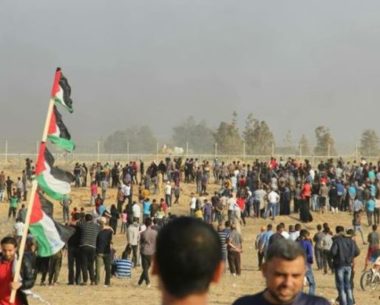 Over 2,000 Palestinians gathered in various parts of the Gaza Strip on Friday to take part in the weekly ‘March of Return’ protests.

The Palestinian Ministry of Health reported that five Palestinians were shot with live rounds fired by the army across the perimeter fence.

One of the wounded Palestinians was shot in the head, and suffered a serious injury.

It added that four Palestinians were shot with rubber-coated steel bullets, and dozens suffered the effects of teargas inhalation.

The protests were held on Palestinian land across the eastern parts of the Gaza Strip, from Beit Lahia and Beit Hanoun, in northwest Gaza, to Gaza city and the central district, in addition to Rafah and Khan Younis, in the southern part of the coastal region.