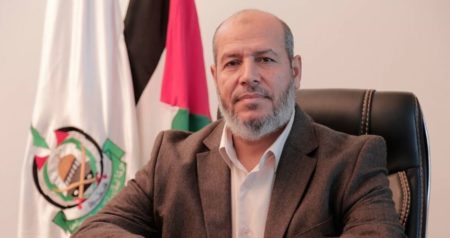 Member of Hamas’ political bureau, Khalil al-Hayya, has described the information about a long-term truce between the Palestinian resistance in Gaza and the Israeli occupation state as “false and unfounded.”

In an interview conducted with him by Al-Aqsa satellite channel, on Wednesday, Hayya expressed his belief that “talking about a long-term truce in Gaza by some people is aimed to discredit the resistance or it could be part of Netanyahu’s lies in the context of his electoral fight or to cover up other things.”

He accused some Palestinian parties and “others not from Palestine” of insisting on falsifying facts and seeking to damage the reputation of the Palestinian resistance.

“Hamas has accustomed the factions to transparency and partnership, and we do not hid any talks we conduct with all parties,” the Hamas official said, adding that if there was any proposal about a long-standing truce in Gaza, all the resistance factions would know about it.

As for the current foreign tour of Hamas political bureau chief Ismail Haniyeh, Hayya said that the Hamas delegation has discussed, with the Egyptian officials, their country’s role in supporting the Palestinian cause and other issues of mutual interest.

He also said that Haniyeh and his accompanying delegation highlighted the need to pressure the Israelis to honor the recent understandings over Gaza, end the siege and stop using deadly force against the participants in the March of Return rallies.

He affirmed, according to Days of Palestine, that Haniyeh’s foreign tour is intended to improve Hamas’s political relations with other countries, and to rally support for the Palestinian people and their resistance.

Army Detains Several Palestinians from the West Bank, including a Former Prisoners