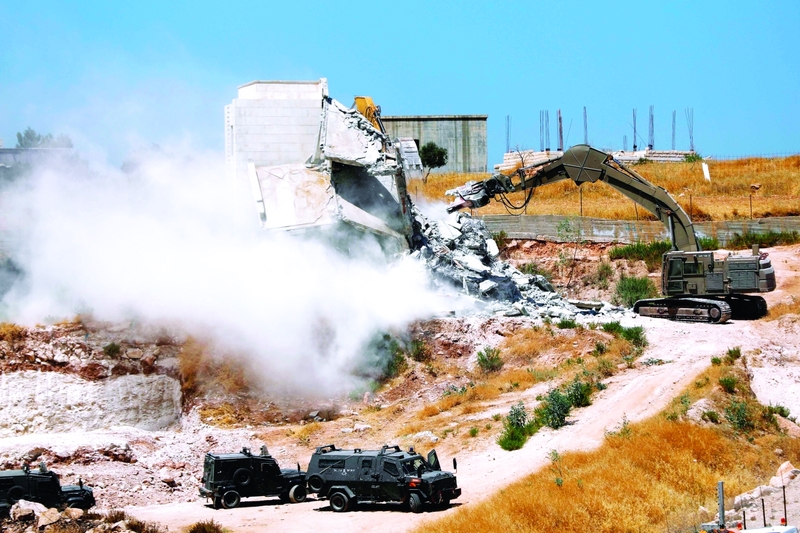 Citing the lack of building permits, Israeli forces demolished 22 Palestinian-owned structures in in the occupied West Bank and East Jerusalem over the past two weeks, displacing 49 people and otherwise affecting over 800 others, said the UN Office for the Coordination of Humanitarian Affairs (OCHA), in its biweekly report on Israel’s violations of human rights.

OCHA said that half of the structures demolished in the West Bank had been previously provided as humanitarian assistance, while four of the localities affected by the demolition of ten structures are Bedouin communities located in or around an area planned for settlement expansion (the “E1” plan) and face the risk of  forcible transfer. Another eight structures were located in areas declared closed for Israeli military training (“firing zones”), the report added.

On 28 November, Israeli forces punitively demolished four homes and three water cisterns in Beit Kahil village (Hebron), in Area B, displacing 15 people, including six children. The structures belong to the families of four Palestinians accused of killing an Israeli soldier in August 2019. The incident triggered clashes with Israeli forces, which resulted in the injury of six Palestinians, including two children. This is the seventh punitive demolition incident so far this year, carried out citing “deterrence needs”.

On settler violence during the same period, the report said over 800 trees and 200 vehicles owned by Palestinians were vandalized in 11 separate incidents by Jewish settlers. Coinciding with the end of the annual olive harvest season, damage to (mostly olive) trees was recorded in the West Bank villages of Sebastia, Al Khadr and As Sawiya. In the latter village, which was attacked twice over the course of three days, Israeli settlers set up a tent near one of the targeted plots.

“Since the beginning of 2019, over 7,500 Palestinian-owned trees have been vandalized, reportedly by Israeli settlers,” said OCHA, according to WAFA. “On 9 December, assailants slashed the tires of 189 Palestinian cars in the Shu’fat neighborhood of East Jerusalem and sprayed “price tag” graffiti in Hebrew on the walls of several buildings. Additional vehicles were vandalized or set on fire in the villages of Khallet Sakariya (Bethlehem), Deir Ammar and At Tayba (both in Ramallah).”

Also during the past two weeks, Israeli forces shot and killed a 16-year-old Palestinian boy to the east of Khan Younis, in the Gaza Strip, and injured another eight Palestinians, including six children. The incident occurred on Friday, 29 November, when a group of youngsters approached Israel’s perimeter fence around Gaza and confronted Israeli forces.

Another 90 Palestinians, including 36 children, were injured by Israeli forces near the perimeter fence between Gaza and Israel, during the “Great March of Return” demonstrations, which resumed on 6 December after a three-week pause. Forty-four (44) of the injuries were hospitalized, according to the Palestinian Ministry of Health in Gaza.

On 30 November, Israeli forces shot and killed an 18-year-old Palestinian youth in Beit ‘Awwa village (Hebron), reportedly after he threw a Molotov cocktail at an Israeli military patrol; the corpse has been withheld by the Israeli authorities. Another two Palestinians, including one child, were arrested during the same incident.

An additional 181 Palestinians, including at least 18 children, were injured by Israeli forces during multiple protests and clashes across the West Bank. Over half of these injuries were recorded on 26 November, during protests against a recent statement by the US Secretary of State about the legality of Israeli settlements, and in solidarity with Palestinian prisoners in Israeli jails, who are holding a hunger strike.