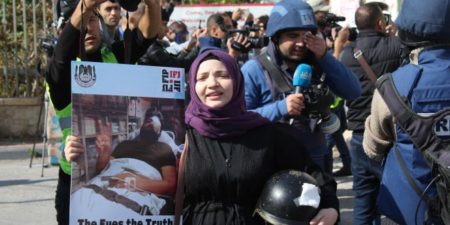 A report by the Palestinian Journalists Syndicate (PJS) said that since the beginning of 2019 and until the end of November, Israeli forces carried out 690 violations against Palestinian media.

The violations include the shooting of live ammunition and other bullets towards journalists, leading to the injury of 72 media professionals, some of them still under medical treatment.

These cases include photojournalist Moath Amarneh, who lost his eye as a result of a bullet, same as photojournalist Attia Darwish. Journalist Mohammad Al-Arbeed was shot with live ammunition in his thigh, photojournalist Nidal Shtayyeh was hit with two rubber-coated metal bullets in the left thigh.

Foreign media professionals were also victims of Israeli aggressions, including German journalist and author Jurgen Todenhofer, shot by a rubber-coated bullet on his shoulder in Gaza.

According to the report, there is a clear increase in the targeting of journalists by occupation forces. There were several attacks with sound bombs, resulting in 58 different injuries, including Muhammad Omar Abdullah Kassab as well as Palestine TV Cameramen Fadi al-Jayyousi, hit directly in the head while covering a raid against a village north of Ramallah.

The report includes over 200 violations such as beatings, detentions and making use of force to prevent media coverage. Around 31% of such violations were carried against female media professionals.
The targeting of media professionals has been particularly intense in the governorates of Gaza, Jerusalem, Ramallah, Hebron and Nablus.

PNN further reports that harassment and attacks against Palestinian media professional have also taken place through social media platforms, including Facebook, Whattsapp and Twitter. The Journalists’ Syndicate has monitored about 300 violations made in cooperation from Israeli occupation security services and political institutions.

During the period of this report there were 14 detentions of media professionals, while 18 are still in the occupation prisons. The report also highlights the intrusion of occupation forces into press institutions, private homes of journalists, imposing financial fines, the prohibition of movement and travel among other violations