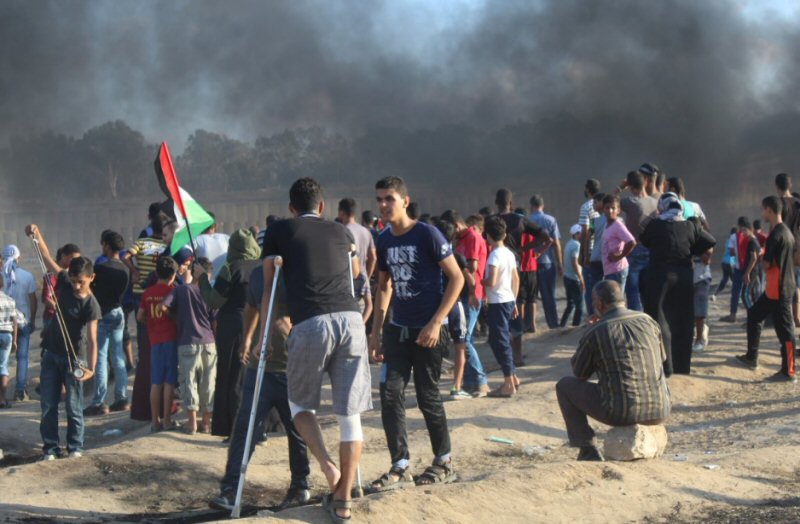 Israeli forces continued with systematic crimes in the occupied Palestinian territory (oPt) for the weeks of 06 – 12 September, 2018.

In the Gaza Strip, the Israeli forces killed 2 Palestinian children during the peaceful protest. On 07 September 2018, Belal Mustafa Mohammed Khafajah (17) from Rafah City was killed after being shot with a bullet to the chest.

On the same day, Ahmed Musbah Ahmed Abu Tyour (16) was wounded with a bullet to the right knee during his participation in the Return and Breaking the Siege in eastern Rafah City.  His death was declared the next day after succumbing to his wounds.  A video showed Abu Tyour being shot with a bullet while jumping and making the victory sign around 20 meters away from the Israeli snipers who directly shot him without posing any threat to them.

On 07 September 2018, medical sources at al-Shifa Hospital in Gaza declared the death of Amjad Hamadonah (19) from Jabalia refugee camp in the northern Gaza Strip after succumbing to wounds he sustained during his participation in the Return and Breaking the Siege March on 13 July 2018 in eastern Abu Safiyah Hill in eastern Jabalia.  He was wounded with a bullet to the left knee, cutting the main artery, and at that time, his condition was described as serious.

In a different crime, 09 September 2018, Israeli forces killed ‘Etaf Mohammed Musleh (29) from al-Nuzha Street in Jabalia.  The Israeli forces opened fire at him when he along with other civilians approached the border fence in eastern Abu Safiyah Hill, northeast of Jabalia in the northern Gaza Strip.  An Israeli force then moved into the area to evacuate the body of the above-mentioned civilian.  His death was later declared while his body is so far under the Israeli custody.

Injuries in the Gaza Strip during this Week

In the West Bank, during the reporting period, the Israeli forces wounded 12 Palestinian civilians, including 4 children, in addition to dozens suffering tear gas inhalation.  Three of those wounded were wounded during the peaceful protests against settlements.

During the reporting period, Israeli forces conducted at least 47 military incursions into Palestinian communities in the West Bank and 2 similar ones into Jerusalem and its suburbs. During those incursions, Israeli forces arrested at least 19 Palestinians, including 3 children in the West Bank.  Meanwhile, five other civilians were arrested in Jerusalem and its suburbs.  Only one of them, a child, is so far under arrest while the rest were released, including an Islamic Endowments Officer, girl, her aunt and the latter’s husband after denying them the entry into al-Aqsa mosque for various periods.

As part of demolitions, on 06 September 2018, the Israeli forces levelled a 300-square-meter land near Deiristiya village entrance, north of Salfit, in a prelude to confiscate it, noting that its owner was about to build a commercial facility on it as he had obtained a license for this upon a letter he sent to the Palestinian Military Liaison and in coordination with the Israeli Liaison.  It should be noted that the land is adjacent to his house.

As part of the Israeli settlers’ attacks against Palestinian civilians and their property, on 06 September 2018, a group of settlers set fire to a big batch of construction wood boards in Khelet al-Wusta area between the villages of Qasrah and Jaloud in Nablus.

On 08 September 2018, a number of settlers living in the settlement outposts of Hebron’s Old City closed al-Sahlah Road in front of a PRCS ambulances that was carrying a patient on the closed Shuhadaa’ Street and threw stones at it.  As a result, the lights and rear window were damaged and the sides were affected as well.

On 09 September 2018, a number of settlers damaged and broke the branches of 18 ancient trees using saws in al-Hamrah area, east of Kherbet Tawanah to the east of Yata in southern Hebron.  It should be noted that the village has been subject to repeated attacks by settlers, including their attempts to intimidate students and deny them access to their schools in the village in addition to attacking the shepherds.

Israeli forces continued its excessive use of lethal force against peaceful demonstration organized by Palestinian civilians in in the West Bank and Gaza Strip, and it was named as “The Great March of Return and Breaking Siege.” The demonstration was in protest against the U.S. President Donald Trump’s declaration to move the U.S. Embassy to it. The demonstration was as follows during the reporting period:

The Israeli snipers stationed behind sand barriers along the border fence deliberately and selectively opened fire at the protestors, who were 300 meters away from the main border fence, and fired tear gas canisters. As a result, several casualties were reported.

The incidents were as follows in the following areas:

According to observations by PCHR’s fieldworker, the Israeli forces heavily deployed in the border area amidst heavily firing of live bullets and tear gas canisters. As a result, the number of casualties increased comparing with the last weeks, despite the peaceful nature of most of the demonstrations.

The wounded civilians were taken to the medical point in the Return encampment, east of Rafah and then transferred to Abu Yusuf al-Najjar hospital in Rafah and Gaza European Hospital in Khan Younis. Doctors classified 5 civilians’ injuries as serious. One of them namely Ahmed Mesbah Ahmed Abu Toyour (16)died at approximately 10:15 on Saturday, 08 September 2018 at Gaza European Hospital in Khan Younis, succumbing to wounds he sustained after he was hit with a live bullet to the right knee. Ahmed was wounded when he was in front of a site belonging to the Israeli snipers, 20 meters into the west of the border fence between the Gaza Strip and Israel Ahmed threw a stone at the soldiers’ site, raised the victory sign and jumped and exclaimed before them. after his injury, Ahmed underwent 2 surgeries that continued for 6 hours and he received 30 blood units. He was then admitted to the Intensive Care Unit (ICU) until his death was announced.

Meanwhile, Israeli soldiers stationed behind sand barriers and cement cubes heavily opened fire and fried a large number of tear gas canisters at Palestinian civilians participating in the demonstration and approached the coastline. As a result, 33 civilians, including 8 children, a paramedic and a journalist, were wounded. The injuries were classified as follows:

Fifteen civilians, including 3 children, were hit with live bullets and its shrapnel. Among those wounded was ‘Atiyah Nasser Ahmed Hejazi (28), a photojournalist at al-Manarah News Agency from Sheikh Redwan neighborhood in Gaza City, was hit with a live bullet to the right knee.

The wounded civilians  were transferred via ambulances belonging to PRCS and Medical Services to the Indonesian and al-‘Awda Hospitals. Doctors classified 2 civilians” injuries as serious while the other civilians’ injuries were between minor and moderate.