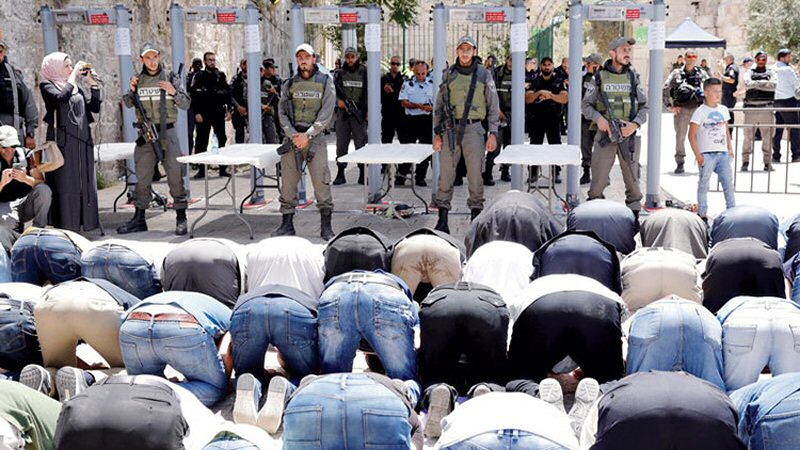 Israeli forces continued with systematic crimes in the occupied Palestinian territory (oPt) for the week of 13 – 19 July, 2017.

During the reporting period, Israeli forces killed 6 Palestinian civilians. Three of them were killed inside al-Aqsa Mosque yards in occupied Jerusalem, while the three others were killed in the central and southern West Bank. Moreover, Israeli forces wounded 37 Palestinian civilians, including a child, in the West Bank and Gaza Strip. Thirty two of them were in the West Bank and the 5 others, including a child, were in the Gaza Strip. Israeli forces in the Gaza Strip continued to chase the Palestinian fishermen in the sea and to open fire at farmers in the border areas.

In the West Bank, on 14 July 2017, in excessive use of force, Israeli forces killed Bara’ Hamamda (18) and wounded 2 others during an Israeli incursion into al-Dheisha refugee camp, south of Bethlehem, for arrests.

On 16 July 2017, Israeli officers killed Ammar Ahmed al-Tirawi (34), who is wanted to the Israeli forces, when they moved into Kufor Ein village, northwest of Ramallah. Gunfire was heard from a poultry farm in the eastern side of the village, after which the Israeli forces withdrew. The village residents hurried to the said area and saw blood in a greenhouse and in the main street, but found no corpse. Moreover, Israeli forces arrested the victim’s cousin and kept in the corpse in custody.

On 18 July 2017, Israeli forces killed Ra’fat Herbawi (29), from al-Karam valley neighbourhood, west of Hebron, after opening fire at his vehicle near Beit Aynoun intersection on bypass road (60). Israeli forces claimed that he attempted to deliberately run over a number of Israeli officers near the street. His corpse was taken by an Israeli military jeep to an unknown destination.

During the reporting period, in addition to the two wounded persons mentioned above, Israeli forces wounded 30 Palestinian civilians. Six of them sustained live bullet wounds, 17 sustained metal bullet wounds and 9 others were hit with sound bombs.

On 16 July 2017, 2 fishermen were wounded when Israeli forces stationed in the sea opened fire at a fishing boat on board of which were 3 fishermen sailing within the allowed fishing limits off Khan Yunis shore, south of the Gaza Strip. The 2 fishermen were transported to Nasser Hospital to receive the necessary medical treatment. Their wounds were classified as moderate.

In the context of opening fire at the border area, on 13 July 2017, Israeli forces stationed at the border fence, east of Gaza Valley, opened fire at the shepherds and farmers in the area. However, no casualties were reported.

During the reporting period, Israeli forces conducted at least 58 military incursions into Palestinian communities in the West Bank, and 8 others into Jerusalem and its suburbs. During these incursions, Israeli forces arrested at least 57 Palestinian civilians, including 5 children, 3 girls and a journalist. Twenty six of them, including 2 children and the 3 girls, were arrested in occupied Jerusalem and its suburbs.

Moreover, Israeli forces raided offices of Ramasat for TV services and Palmedia for media services in Hebron. They confiscated 4 hard disks from the first office and 6 others from the other.

Following the armed clash between the Palestinian civilians from Um al-Fahm and the Israeli officers in al-Aqsa yards on Friday morning, 14 July 2017, that resulted in the killing of 2 Israeli officers and the 3 Palestinians, dozens of Israeli intelligence and police officers and soldiers stormed al-Aqsa mosque and cordoned it off and denied the Palestinians access to the mosque. Moreover, they locked up all  the Islamic Endowments’ (Awqaf) officers inside rooms, confiscated their cell phones and referred some of them to interrogation. Israeli forces closed all entrances to the Old City with metal barriers. As an unprecedented measure, the Israeli authorities banned the Islamic Call to Prayer (Adhan) in al-Aqsa mosque until Sunday noon, 16 July 2017, after which they declared they would gradually reopen the mosque after erecting 9 metal detector gates  at al-Asbat, al-Majles and al-Selsela gates. However, they kept the remaining gates closed. The Muslim worshipers refused since then entering the mosque through those detector gates.

Following the armed clash occurred in al-Aqsa Mosque yards, the Israeli authority ordered to close all the Mosque gates and the Old City entrances. It also fully imposed closure in the area and deployed dozens of Israeli soldiers in the mosque, its yards and roads leading to it. The Israeli police officers vacated all the Palestinian worshipers from the al-Aqsa Mosque yards and then locked them in the Qibli (southern) mosque. They then raided the Mosque’s rooms and banned the calls to prayer (Adhan). The Islamic Awqaf officers were prevented from entering the Mosque and around 58 of them were arrested. The Israeli police officers raided al-Motaharah area inside the Mosque and damaged its contents.

A Palestinian young man, who was stationed in al-Aqsa Mosque yards during the clash, said that the Israeli forces locked in the Qibli (southern) mosque, searched them, checked their IDs, confiscated their cell phones and took some of them for investigation. Furthermore, the Israeli police officers raided the mosques and threw trash cans under the pretext of searching. The Islamic Endowments (Awqaf) Department confirmed the arrest of 58 of its officers. Firas al-Dibes, Public Relations and media officer at (Awqaf) Department, stated that the Israeli forces took them for interrogation in al-Muskubiya police center in West Jerusalem.  The Israeli forces also arrested the Grand Mufti of Jerusalem, Sheikh Mohammed Hussein, while performing the Friday prayer and arrested the former Grand Mufti of Jerusalem, ‘Akrama Sabri, for few hours and then released them on bail of NIS 10,000 after questioning them.

Lawyer, Ma’moun al-Hasheem, said that the court extended the detention of 3 Islamic Awqaf officers to next Monday. These officers were identified as Ayman al-Khaldi, Majed al-Tamimi and Tareq Sandoqah. It should be noted that the Israeli Intelligence Service released all the arrested persons except the abovementioned officers. The arrested officers were questioned about the attack and filming it, in addition their cell phones were confiscated.

Dozens of Palestinian young men performed the Friday prayer in Jerusalem’s streets and at the entrances to al-Aqsa Mosque and Old City because al-Aqsa Mosque was closed and (Adhan) was banned. In al-‘Amoud Gate area, the Israeli forces attacked Palestinian civilians present there, hit them, forcibly vacated the place and put iron barriers in the area to prevent the prayer. In the afternoon, Israeli forces arrested Rabah Abu Mizer and his two daughters Nirmeen and Aseel; his niece Asmaa; and Mohamed Abu Shosha from Jerusalem’s Old City. Moreover, Mohamed Jadallah, member of the National Labor Authority in Jerusalem, was arrested after raiding his house in Beit Safafa village. It should be noted that his arrest was extended in order to bring him before the court. Mohamed was accused of incitement.

Abdel al-‘Azim Slhub, Chairman of Awqaf Council; and Wasif al-Bakri, Acting Chief Judge of Jerusalem and President of Sharia Court of Appeals in Jerusalem, stated that the Israeli forces searched the offices of the Islamic Endowments (Awqaf) Department, manuscript center and Islamic Museum, the office of the Acting Chief Judge, clinics and mosques. Abdel al-‘Azim Slhub clarified that the Islamic Museum and the office of Acting Chief Judge contain historical archives, manuscripts and documents for Jerusalem going back to 800 years in history and other archives representing the political, popular and economical Jerusalem’s history.

The Israeli forces continued the closure of the Old Jerusalem’s gates and deployed dozens of Israeli soldiers in the area. They just allowed Jerusalemites to enter the city and checked their IDs before allowing them to enter. The Old City was almost empty, and all shops were closed. It should be noted that the Israeli forces obliged Palestinian traders in Sultan Suliman Street to close their shops and prevented the movement of public and private vehicles in streets adjacent to Old Jerusalem’s walls.