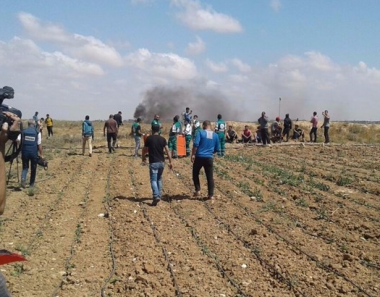 Israeli soldiers injured, Friday, at least twenty Palestinians, including six medics, in various areas near the border fence, in the Gaza Strip, and caused damage to two ambulances.

The Palestinian Health Ministry said the incidents took place along the border fence, from Rafah in the southern part of the Gaza Strip, until Beit Hanoun, in northern Gaza.

It added that twenty Palestinians, including six medics, suffered the severe effects of teargas inhalation, especially after the army caused damage to two ambulances, after firing gas bombs at them.

The incidents took place when the soldiers assaulted dozens of Palestinians, protesting in their lands, in areas close to the border fence.