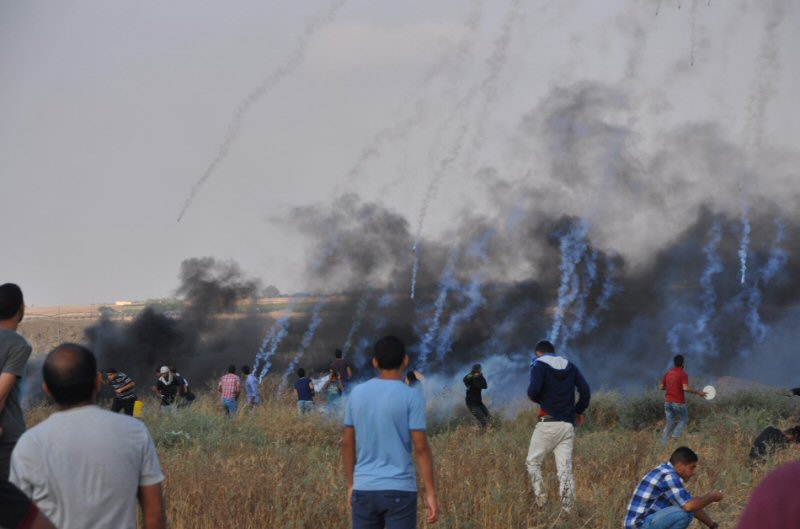 Israeli forces continued with systematic crimes in the occupied Palestinian territory (oPt) for the week of 13 – 20 June, 2018.

In the Gaza Strip, on 18 June 2018, in use of lethal force, the Israeli forces killed a Palestinian civilian and wounded another.  On the same day morning, the Israeli warplanes launched one missile at 4 Palestinians who sneaked into the border fence between the Strip and Israel near the “Karny” Industrial Area in eastern Shija’iyah in eastern Gaza City.  As a result, one of them identified as Sabri Abu Khader (23) from al-Tufah neighborhood was killed and another 19-year-old civilian was wounded with shrapnel to the leg.

In the same context, two civilians, including a child, succumbed to their wounds.  On 14 June, medical sources in the Gaza European Hospital in Khan Younis in the southern Gaza Strip declared death of Ahmed al-‘Aasi (21) from Khan Younis after succumbing to his serious wounds.  According to investigations conducted by PCHR at that time, the abovementioned civilian was hit with a gas canister in the head during the demonstrations on Friday, 08 June 2018, east of the Return encampment in Khuza’ah in eastern Khan Younis.

On 18 June 2018, medical sources at al-Shifa Hospital in Gaza City declared the death of Zakariah Bushbush (14) from al-Maghazi refugee camp in the central Gaza Strip succumbing to wounds he sustained on 30 May 2018.  Zakaria was wounded during his participation in the Return March in eastern al-Bureij with a bullet that entered his chest and exited his back.  His condition was very serious so he was transferred to al-Aqsa Martyrs Hospital.

On 20 June 2018, Medical sources at St. Josef Hispital in occupied East Jerusalem declared the death of Mohammed Abu Farhanah (23) from ‘Abasan al-Kabirah in Khan Younis in the southern Gaza Strip after succumbing to his serious wounds.  The abovementioned was wounded with 2 bullets to the abdomen on 14 May 20118, after the Israeli forces opened fire at him during his participation in the Return March demonstrations in eastern Khan Younis.  At that time, he was taken to Nasser Hospital and admitted to the intensive Care Unit (ICU) due to his serious condition.  He was later referred to St. Josef Hospital in Jerusalem until his death was declared on the abovementioned day afternoon.

During the reporting period, the Israeli forces wounded 7 Palestinians, including 2 military police officers who were wounded when they were in their workplace at the time of targeting the nearby site belonging to the armed groups by the Israeli warplanes.

As part of the airstrikes, on 13, 14, 15, 16, 17 and 20 June 2018, the Israeli warplanes launched 15 missiles at the Palestinians participating in the Great March of Return in eastern al-Bureij and al-Maghazi in the central Gaza Strip.  Meanwhile, the Israeli soldiers stationed along the border fence between the Gaza Strip and Israel fired live bullets and tear gas canisters at those inside the encampment.  As a result, two civilians sustained shrapnel wounds in their bodies.

On 17 June 2018, the Israeli warplanes launched 3 missiles at a site belonging to the Palestinian armed groups, southeast of al-Bureij in the central Gaza Strip.

On 18 June 2018, Israeli drones fired 3 missiles, 3 minutes between each, at a border control point belonging to the Palestinian armed groups and an agricultural land in Eastern al-Qararah village, northeast of Khan Younis in the southern Gaza Strip.  On the same day, an Israeli warplane launched a missile at a Palestinian civilian grey Mitsubishi car parked near al-Murabeteen Mosque at the end of Baghdad Street in al-Shija’yah neighbourhood in eastern Gaza City.  On the same day, the Israeli warplanes launched 3 missiles at The Navy Site near al-Shati’ refugee camp, west of Gaza City.  In all the airstrikes, no casualties were reported.  On the same day, the Israeli warplanes in 4 separate airstrikes launched 7 missiles at 2 sites belonging to al-Qassam Brigades (the military wing of Hamas) in Tal al-Za’atar area in Jabalia and al-Safinah building, southwest of Jabalia in the northern Gaza Strip.

As part of targeting the border areas, on 14 June 2018, the Israeli forces along the border fence between the Gaza Strip and Israel, east of Deir al-Balah in the central Gaza Strip, opened fire at Palestinian agricultural lands adjacent to the border fence.  However, no casualties were reported.

On 15 June 2018, Israeli forces fired shells at a border control point belonging to the Palestinian armed groups, east of al-Shokah village in eastern Rafah in the southern Gaza Strip.  However, no casualties were reported.

On 19 June 2018, Israeli forces during the reporting period wounded a Palestinian civilian when they moved into the Western Farm village, north of Ramallah and a number of youngsters gathered to protest against their incursion.  As a result, the Israeli soldiers opened fire wounding a 21-year-old civilian with a bullet to the abdomen.

As part of demolishing civilian facilities, on 20 June 2018, the Israeli military vehicles demolished a house in Qalendia village, north of occupied East Jerusalem, under the pretext of non-licensing.  The 50-square-meter house which belonged to ‘Ali Mutair was comprised of a room, kitchen and bathroom; and Mutair, his wife and kids moved to live in it only 5 months ago.

On the same day, the Israeli municipality staffs carried out a campaign to raid, confiscate and demolish in many areas in occupied east Jerusalem under the pretext of non-licensing.  The military vehicles demolished the outside walls, house doors, and removed the perimeter fences of the land belonging to the Islamic Endowments Department in al-Joz Valley neighbourhood.  It should be noted that those houses are built on a land which the Israeli forces seek to confiscate in favour of building the Hebrew Biblical Gardens extended to Siwlan village, south of the Jerusalem’s Old City.

Israeli Settlement Activities and Settlers’ Attacks against the Palestinian Civivlians and their Property:

On 13 June 2018, the Israeli forces confiscated a GCB digger which was reclaiming a land located in Area C according to the 1993 Oslo Accords between ‘Aqraba and Majdal Bani Fadel villages, southeast of Nablus.  The land belongs to Ayman Bani Fadel from ‘Aqraba village while the digger belongs to Mohammed ‘Abdel Razzaq Dawoud ‘Odah from nearby Qasrah village.

On 14 June 2018, the Israeli forces notified the residents of Qa’oun Plain near Bardala village in the northern Jordan Valley and located in Area C according to the 1993 Oslo Accords to stop working in the Solar Cells Project to supply artesian wells with electricity in the area.  It should be mentioned that this project is funded by the Italian GVC.

Continuing the demonstrations in protest against the U.S. President Donald Trump’s declaration to recognize Jerusalem as the capital of Israel and move the U.S. Embassy to it, Palestinian civilians organized protests against the decision throughout the West Bank and Gaza Strip. The demonstrations were as follows during the reporting period:

Three Civilians, including a Child, Succumbed to Their Wounds: