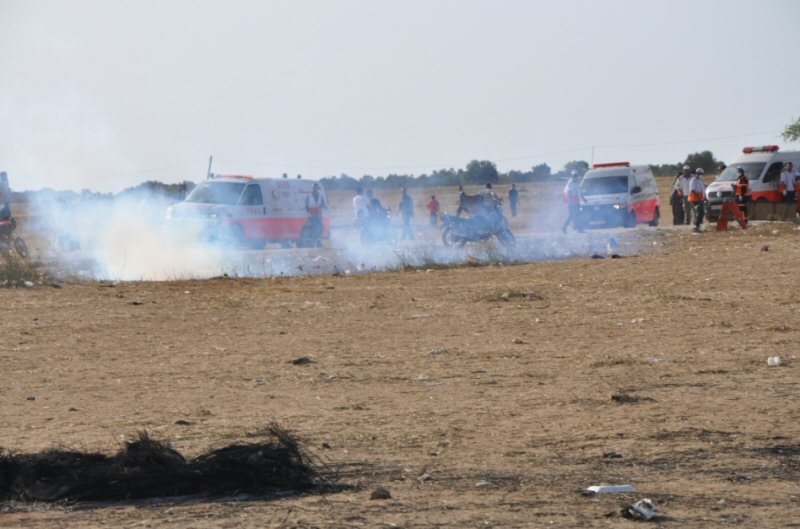 Israeli forces continued with systematic crimes in the occupied Palestinian territory (oPt) for the week of 17 – 23 May, 2018.

Israeli forces continued to use lethal force against peaceful Palestinian protestors in the Gaza Strip. Two succumbed to wounds sustained in the Great March of Return, in addition to another child in the West Bank.

35 Palestinian civilians, including 2 children and a journalist, were wounded in the Gaza Strip and West Bank.

Israeli forces continued to use excessive lethal force against Palestinian civilians, who participated in peaceful demonstrations organized within the activities of the “Great March of Return and Breaking the Siege” in the Gaza Strip, which witnessed for the 8th week in a row peaceful demonstrations along the eastern and northern Gaza Strip border area. During the reporting period, the Israeli forces wounded 29 Palestinian civilians, including a journalist; 2 of those wounded are in serious condition.  Meanwhile, 2 civilians succumbed to their wounds.  In the West Bank, a child succumbed to his wounds while 6 Palestinian civilians, including 2 children, were wounded in separate incidents.

In the Gaza Strip, on 18 May 2018, thousands of Palestinian civilians participated in the Great March of Return and Breaking the Siege activities along the northern and eastern borders of the Gaza Strip.  The Israeli forces used force against them, wounding 27 protestors, including a journalist.  Moreover, during the reporting period, 2 other civilians were wounded, increasing the total number of those wounded to 29 protestors.

In the same context, medical sources at al-Shifa hospital in Gaza City, on 18 may 2018, declared the death of Mo’een al-Sa’ie (59), from al-Shati’ refugee camp, west of Gaza City, after he succumbed to his wounds.  On 19 May 2018, medical sources at al-Quds Hospital in Gaza City declared the death of Mohammed ‘Alian (18) from al-Nussairat in the central Gaza Strip, succumbing to his wounds.  Al-Sa’ie was previously wounded with a bullet to the chest to the east of Malakah square, east of al-Zaytoun neighborhood in eastern Gaza City while ‘Alian was wounded with a bullet to the head in eastern al-Bureij during their participation in the Great March of Return on Monday, 14 May 2018.

During the reporting period, Investigations and Field Observations by PCHR’s Fieldworkers Confirm the Following:

As part of targeting the border areas, on 20 May 2018, Israeli forces stationed along the border fence between the Gaza Strip and Israel, east of al-Amal neighbourhood, northeast of Beit Hanoun in the northern Gaza Strip, opened fire at the border area.  However, no casualties were reported.

On 22 May 2018, the Israeli fired an artillery shell at a border control checkpoint belonging to an armed group in eastern al-Bureij.  However, no casualties were reported.

As part of targeting Palestinian fishermen in the Gaza Sea, the Israeli forces continued to escalate their attacks against the Palestinian fishermen, pointing out to the ongoing Israeli policy of targeting their livelihoods.  During the reporting period, PCHR documented 10 attacks against the fishermen, including 5 attacks in the north-western Beit Lahia and 5 in Western Soudaniya area, west of Jabalia in the northern Gaza Strip.

As part of the airstrikes, on 17 May 2018, Israeli drones and warplanes launched 10 missiles in 4 airstrikes against ‘Askalan military site and al-Saifnah building belonging to al-Qassam Brigades in the northern Gaza Strip.  On 23 May 2018, the Israeli warplanes launched 6 missiles at Ahmed al-Ja’abari military site in eastern Tofah neighbourhood, causing damage to the sites.  However, no casualties were reported.

On 23 May 2018, the Israeli warplanes launched 2 missiles at 2 boats prepared to welcome the anti-blockade flotilla in the Gaza Seaport, west of Gaza City, causing damage to both of them.

In the West Bank, on 23 May 2018, medical sources at al-Najah University Hospital in Nablus declared the death of ‘Oday Abu Khalil (15) from ‘Ein Siniya village, north of Ramallah, succumbing to his wounds.  According to PCHR’s investigations, on 15 May 2018, the abovementioned child was wounded during his participation in a peaceful protest at the northern entrance to al-Bireh in commemoration of Palestinian Nakbah Day, against the relocation of the U.S. Embassy in Jerusalem and the Israeli crimes in the Gaza Strip.

On 18 May 2018, Mohammed Abu al-Hummus was wounded when the Israeli forces moved into al-‘Issawiya village, northeast of occupied East Jerusalem, and dozens of Palestinian young men protested against them.  The Israeli soldiers immediately fired rubber-coated metal bullets at the young men, wounding Abu al-Hummus and arresting him.

On 19 May 2018, a Palestinian civilian was wounded during his participation in the weekly Kafr Qaddum peaceful protest, northeast of Qalqilya, against the closure of the eastern entrance to the village for 15 years in favour of “Kadomim” settlement established on the village lands.

On 21 May 2018, 3 civilians, including 2 children, were wounded when Israeli forces moved into Jenin and surrounded a house to carry out an arrest campaign.  A number of civilians gathered and protested against the Israeli soldiers who opened fire at the civilians, wounding the 3 above-mentioned civilians.  On 23 May 2018, a civilian was wounded in Nablus in similar circumstances.

During the reporting period, medical staffs in “Assaf Harofeh” Medical Center near al-Ramlah in Israel announced the death of Palestinian prisoner ‘Aziz Mousa Salem ‘Eweisat (53) from al-Mukkaber Mount village, southeast of East Jerusalem, in suspicious circumstances.  ‘Eweisat who was serving a 30-year sentence in prison was taken from al-Ramlah Prison to “Assaf Harofeh” Medical Center on 09 May 2018 after he had a stroke and underwent an open heart surgery in the next day in Tal Hashomer Hospital.  He was then returned to “Assaf Harofeh”, where he stayed until his death was declared.  The Palestinian Prisoners Center for Studies said to PCHR’s fieldworker that prisoner ‘Eweisat was beaten and maltreated by a group of jailers in “Eshel” Prison  after the prison service claimed  that he poured hot water on a jailer in the beginning of May.  His family said that on 11 May 2018, they managed to visit ‘Aziz at Tel Hashomer Hospital for 2 minutes, where they noticed clear signs of exhaustion on him and that he was under the medication influence. They also noticed bruises and beating signs on his neck.

Israeli Settlement Activities and Settlers’ Attacks against the Palestinian Civivlians and their Property:

As part of the Israeli settlers’ attacks against the Palestinian civilians and their property, on 23 May 2018, a number of settlers cut 700 grapevines planted 15 years ago in the lands adjacent to the Bypass Road 60 in al-Marjamah area, north of Hebron, using electric saws.  Those grapevines were planted on 9 dunums belonging to four farmers from Halhoul.  It should be mentioned that a week ago settlers cut 400 grapevines in the area near the watchtower established in the area.

On Sunday evening, 20 May 2018, medical crews in “Assaf Harofeh” Medical Center near al-Ramlah in Israel announced the death of Palestinian prisoner ‘Aziz Mousa Salem ‘Eweisat (53) from al-Mukkaber Mount village, southeast of East Jerusalem. On 09 May 2018, ‘Eweisat was transferred from al-Ramlah prison to “Assaf Harofeh” Medical Center after he suffered a stroke and stayed there until his death was announced on the abovementioned day.

It should be mentioned that ‘Aziz ‘Eweisat was arrested on 08 March 2014 and sentenced to 30 years in prison after being condemned with planning to explode the gas pipeline of “Armon Hantsev” settlement established on the Palestinian lands of al-Mukaber Mount village.  In the beginning of May, he had a stroke after being transferred from “Eshel” prison to “al-Ramlah” prison. Before the stroke, prisoner ‘Eweisat said to one of the prisoners that he was beaten and maltreated in “Eshel Prison under claims of pouring hot water on a prison official.  On 09 May 2018, he underwent a heart catheterization, and his health condition deteriorated.  After one day, he was taken to “Tel Hashomer” Hospital where he underwent an open heart surgery.  The two day before his death, ‘Eweisat suffered multiple organ failure and was on medical ventilators in “Assaf Harofeh” hospital where he underwent an MRI which showed he suffered from severe inflammation and pulmonary hypertension “increased blood pressure within the arteries of the lungs.” in the left lung.    The Prisoners’ Affairs Authority then called for urgently releasing ‘Aweisat for health reasons and determined a hearing on 25 May 2018 in the Magistrate’s Court in Ramla to consider the request.

‘Eweisat Family said that on 11 May 2018, they managed to visit ‘Aziz at Tel Hashomer Hospital for 2 minutes, where they noticed clear signs of exhaustion on him and that he was under the medication influence. They also noticed bruises and beating signs on his neck.

Two Civilians Succumbed to Their Wounds: